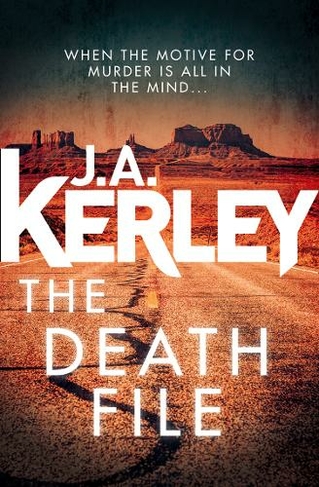 By J. A. Kerley (Author)
Paperback
https://www.whsmith.co.uk/products/the-death-file-13-digital-original/j-a-kerley/paperback/9780008263768-12-000.html £7.37 rrp £8.99 Save £1.62 (18%)
GBP
Availability
In Stock
Free Delivery Available When You Spend £25 Or More
Details
Spend £25 On Eligible Products To Receive Free Standard Delivery To You Home Or Free Next Working Day Click And Collect To Store
Share

Detective Carson Ryder returns, on the trail of a brutal killer with mysterious motives. Two psychologists are murdered 2000 miles apart - one in Phoenix, Arizona, one in Miami, Florida. Amazingly, both have noted down the name of Carson Ryder - a detective with the Florida Center for Law Enforcement who specializes in catching psychopathic killers. Carson joins forces with troubled Phoenix Detective Tasha Novarro to trace a ruthless killer whose advantages include an uncanny talent for persuasion, an utter lack of remorse, and the horrifying ability to predict their every move. A killer even Carson might not be capable of stopping...

J. A. Kerley spent years as an advertising agency writer and producer before his wife demanded he quit work and write a novel, which he thought a fine idea. The result was The Hundredth Man, the first in the Carson Ryder series. An avid angler, bicyclist and hiker, Kerley has traveled extensively throughout the South, especially coastal regions such as Mobile, Alabama, the setting for many of his novels. In addition, he enjoys hiking in Arizona's Sonoran Desert, its spare and rugged beauty forming the backdrop for The Death Files. He has a cabin in the Kentucky mountains, which appeared as a setting in Buried Alive. He lives in Newport, Kentucky, where he enjoys sitting on the levee and watching the barges rumble up and down the Ohio River.