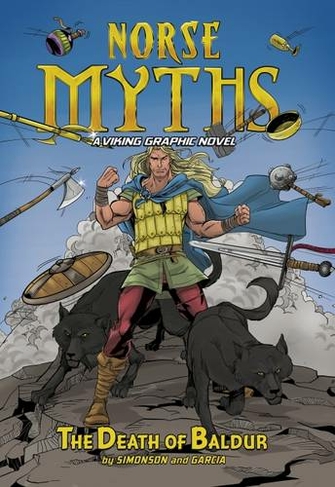 The Death of Baldur

Baldur, Odin's greatest son, is a leader of men - and loved by all. So when a prophecy is made that the end of the world, Ragnarok - the Twilight of the Gods - will occur when Baldur dies, Odin imprisons all those who might be involved in the death of his beloved son. But fate is fate. Baldur will die. The only question is how - and the only result is the beginning of the end for all of creation.

Louise Simonson writes about monsters, science fiction and fantasy characters, and superheroes. She wrote the award-winning Power Pack series, several best-selling X-Men titles, Web of Spider-man for Marvel Comics, and Superman: Man of Steel and Steel for DC Comics. She has also written many books for kids. She is married to comic artist and writer Walter Simonson and lives in the suburbs of New York City. Working out of Mexico City, passionate comic book fan and artist Eduardo Garcia has lent his talented illustration abilities to such varied projects as the Spider-Man Family, Flash Gordon, and Speed Racer. He's currently working on a series of illustrations for an educational publisher while his wife and children look over his shoulder!