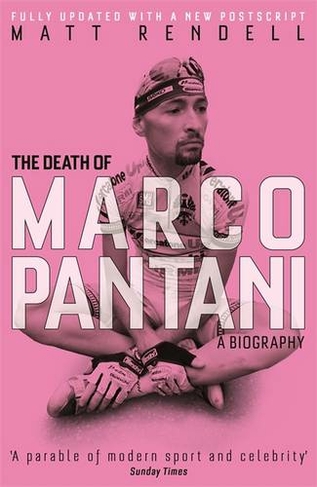 The Death of Marco Pantani: A Biography

By Matt Rendell (Author)
Paperback
The Death of Marco Pantani: A Biography is rated 5.0 out of 5 by 1.
https://www.whsmith.co.uk/products/the-death-of-marco-pantani-a-biography/matt-rendell/paperback/9781474600774-12-000.html £9.01 rrp £10.99 Save £1.98 (18%)
GBP
Availability
In Stock
Free Delivery Available When You Spend £25 Or More
Details
Spend £25 on eligible products to receive free standard delivery to home or free next working day click and collect to store
Share

The intimate biography of the charismatic Tour de France winner Marco Pantani, now updated to include the 2014 and 2015 investigation into Pantani's death. National Sporting Club Book of the Year Shortlisted for the William Hill Sports Book of the Year Award 'An exhaustively detailed and beautiful book . . . a fitting, ambivalent tribute - to the man, and to the dark heart of the sport he loved' Independent On Valentine's day 2004, Marco Pantani was found dead in a cheap hotel. It defied belief: Pantani, having won the rare double of the Giro d'Italia and the Tour de France in 1998, was regarded as the only cyclist capable of challenging Lance Armstrong's dominance. Only later did it emerge that Pantani had been addicted to cocaine since 1999. Drawing on his personal encounters with Pantani, as well as exclusive access to his psychoanalysts, and interviews with his family and friends, Matt Rendell has produced the definitive account of an iconic sporting figure.

Rated 5 out of 5 by Robbo60 from Excellent read A book I've always wanted to read and glad I did, such a sad end to someone who could have been one of the all time greats surrounded by controversy and at the height of cycling dark period.

MATT RENDELL survived Hodgkin's Disease and lectured at British and Latvian universities before entering TV and print journalism. He is the author of A SIGNIFICANT OTHER (W&N, 2004), a top ten sports book and KINGS OF THE MOUNTAINS (Aurum, 2002). He has written for the BBC, ITV and Channel 4, including British coverage of the Tour de France. The National Sporting Club named Matt Rendell BEST NEW SPORTS WRITER 2003.