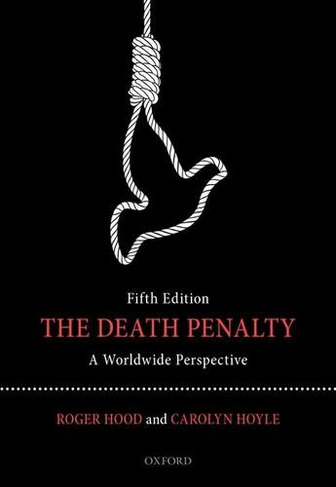 Also available on eBook for £43.43. Click here to purchase from Rakuten Kobo

The fifth edition of this highly praised study charts and explains the progress that continues to be made towards the goal of worldwide abolition of the death penalty. The majority of nations have now abolished the death penalty and the number of executions has dropped in almost all countries where abolition has not yet taken place. Emphasising the impact of international human rights principles and evidence of abuse, the authors examine how this has fuelled challenges to the death penalty and they analyse and appraise the likely obstacles, political and cultural, to further abolition. They discuss the cruel realities of the death penalty and the failure of international standards always to ensure fair trials and to avoid arbitrariness, discrimination and conviction of the innocent: all violations of the right to life. They provide further evidence of the lack of a general deterrent effect; shed new light on the influence and limits of public opinion; and argue that substituting for the death penalty life imprisonment without parole raises many similar human rights concerns. This edition provides a strong intellectual and evidential basis for regarding capital punishment as undeniably cruel, inhuman and degrading. Widely relied upon and fully updated to reflect the current state of affairs worldwide, this is an invaluable resource for all those who study the death penalty and work towards its removal as an international goal.

Professor Roger Hood is Professor Emeritus of Criminology at the University of Oxford and Emeritus Fellow of All Souls College. He took his Ph.D. at the Law Faculty of the University of Cambridge at the Institute of Criminology, and is a Doctor of Civil Law at the University of Oxford. From 1973 to 2003 he was Director of the Oxford Centre for Criminology. In 1986 he received the Sellin-Glueck Award of the American Society of Criminology for 'DistinguishedInternational Contributions to Criminology'; in 2011 the Cesare Beccaria Medal from the International Society of Social Defence and Humane Criminal Policy; and in 2012 the ESC European Criminology Award 'for a lifetime contribution as a European criminologist'. As consultant to the United Nations, he preparedthe Secretary-General's 5th, 6th, and 7th Quinquennial reports on capital punishment.Professor Carolyn Hoyle, Director of the Centre for Criminology, has been at the University of Oxford Centre for Criminology since 1991. She has published empirical and theoretical research on a number of criminological topics including domestic violence, policing, restorative justice, the death penalty, and miscarriages of justice. With Dr Mai Sato, she is currently conducting research into applications to the Criminal Cases Review Commission concerning alleged miscarriages of justice in theUK.