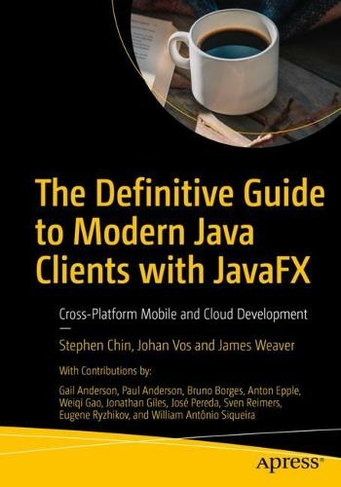 Build enhanced visual experiences and design and deploy modern, easy-to-maintain, client applications across a variety of platforms. This book will show you how these applications can take advantage of the latest user interface components, 3D technology, and cloud services to create immersive visualizations and allow high-value data manipulation. The Definitive Guide to Modern Java Clients with JavaFX is a professional reference for building Java applications for desktop, mobile, and embedded in the Cloud age. It offers end-to-end coverage of the latest features in JavaFX and Java 13. After reading this book, you will be equipped to upgrade legacy client applications, develop cross-platform applications in Java, and build enhanced desktop and mobile native clients. What You Will Learn Create modern client applications in Java using the latest JavaFX and Java 13 Build enterprise clients that will enable integration with existing cloud services Use advanced visualization and 3D features Deploy on desktop, mobile, and embedded devices Who This Book Is For Professional Java developers who are interested in learning the latest client Java development techniques to fill out their skillset. 48 Illustrations, color; 138 Illustrations, black and white; XXII, 621 p. 186 illus., 48 illus. in color.

Stephen Chin is Senior Director of Developer Relations at JFrog, author of Raspberry Pi with Java and co-author of Pro JavaFX Platform. He has keynoted numerous Java conferences around the world, including Oracle Code One (formerly JavaOne), where he is an 8-time Rock Star Award recipient. Stephen is an avid motorcyclist who has done evangelism tours in Europe, Japan, and Brazil, interviewing hackers in their natural habitat. When he is not traveling, he enjoys teaching kids how to do embedded and robot programming together with his teenage daughter.Johan Vos started to work with Java in 1995. He was part of the Blackdown team, porting Java to Linux. His main focus is on end-to-end Java, combining back-end systems and mobile/embedded devices. He received a Duke Choice award in 2014 for his work on javafx on mobile. In 2015, he co-founded Gluon, which allows enterprises to create (mobile) Java Client applications leveraging their existing backend infrastructure. Gluon received a Duke Choice award in 2015. Johan is a Java Champion and an Oracle Developer Champion, a member of the BeJUG steering group, the Devoxx steering group and he is a JCP member. He has been a speaker at numerous conferences on Java.James Weaver is a Java developer, author, and speaker with a passion for cloud-native applications, machine learning, and quantum computing. He is a Java Champion, and a JavaOne Rockstar. James has written books including Inside Java, Beginning J2EE, the Pro JavaFX series, and Java with Raspberry Pi. As a Pivotal Developer Advocate, James speaks internationally at software technology conferences. He tweets as @JavaFXpert.