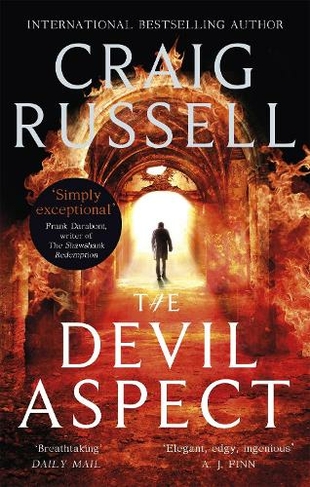 By Craig Russell (Author)
Paperback
https://www.whsmith.co.uk/products/the-devil-aspect-a-bloodpumping-nerveshredding-thriller/craig-russell/paperback/9781472128331-12-000.html £6.55 rrp £7.99 Save £1.44 (18%)
GBP
Availability
In Stock
Free Delivery Available When You Spend £15 Or More
Details
Spend £15 On Eligible Products To Recieve Free Standard Delivery To You Home Or Free Next Working Day Click And Collect To Store
Share

'The best twist I have ever read' (Michael Ridpath, author of Traitor's Gate) 'Breathtaking' (Daily Mail) 'Wildly entertaining . . . truly frightening' (New York Times) _____________ How do you find a killer when you're surrounded by madness? 1935. As Europe prepares itself for a calamitous war, six homicidal lunatics - the so-called 'Devil's Six' - are confined in a remote castle asylum in rural Czechoslovakia. Each patient has their own dark story to tell and Dr Viktor Kosarek, a young psychiatrist using revolutionary techniques, is tasked with unlocking their murderous secrets. At the same time, a terrifying killer known as 'Leather Apron' is butchering victims across Prague. Successfully eluding capture, it would seem his depraved crimes are committed by the Devil himself. Maybe they are... and what links him with the insane inmates of the Castle of the Eagles? Only the Devil knows. And it is up to Viktor to find out. _____________ 'Deep, dark, and twisty . . . a gripping masterpiece of a thriller!' Alex Grecian, New York Times bestselling author of The Yard 'Elegant, edgy, ingenious' A. J. Finn, New York Times bestselling author of The Woman in the Window 'Drags you into its dark world kicking and screaming . . . gets under your skin slowly, then goes deep, like the tip of a butcher knife' New York Times 'Sensational . . . twists are jaw-dropping . . . a mind-blowing story line that will appeal to fans of Caleb Carr and Thomas Harris' Publishers Weekly ' A thrilling, twisting trip through the darkest corridors of the human mind' Daniel H. Wilson, New York Times bestselling author of Robopocalypse 'A tour de force: a clever and visceral thriller' Lincoln Child, New York Times bestselling author 'Dark, stylish and packed with jaw-dropping twists . . . an astonishing piece of work' M. W. Craven, author of The Puppet Show 'A superior thriller, at once stylish, absorbing and compulsive' Laura Carlin, author of The Wicked Cometh 'Well-crafted gothic crime . . . smart, atmospheric' Kirkus Reviews 'A Gothic masterpiece in psychological horror and creeping dread ' Neil Broadfoot, author of No Man's Land 'Deliciously authentic and darkly atmospheric' Graham Smith, author of Death in the Lakes

Craig Russell's novels have been published in twenty-five languages, four have been made into major films in Germany, in one of which he has a cameo role as a detective. He has won the CWA Dagger in the Library and the McIlvanney Prize (for which he has been shortlisted another twice), and has previously been shortlisted for the CWA Golden Dagger, the Ellis Peters Historical Dagger, and the SNCF Prix Polar in France. A former police officer, Craig Russell is the only non-German to have been awarded the Polizeistern - the Hamburg Police's Police Star.When not writing, Craig Russell paints, cooks and reads, but not simultaneously.