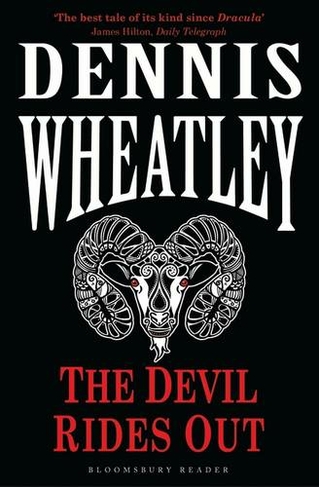 The Devil Rides Out

The aristocratic Duke de Richleau faces new, sinister challenges in this macabre tale of the dark arts. When his good friend Simon Aron's naive curiosity is tested, the Duke, along with his ever-patient friends Rex Van Ryn, and Richard Eaton, must intricately plot a means of both physical and spiritual rescue. But with Van Ryn's affections for a beautiful woman caught in the web of Satanists, and Eaton's ongoing scepticism, they all risk being brought to the verge of madness through dabbling with the powers of evil. From London to the West Country, the slums of Paris to a Christian monastery, the action of this powerful occult thriller moves with fantastic, compelling force.

Dennis Wheatley (1897 - 1977) was an English author whose prolific output of stylish thrillers and occult novels made him one of the world's best-selling writers from the 1930s through the 1960s. Wheatley was the eldest of three children, and his parents were the owners of Wheatley & Son of Mayfair, a wine business. He admitted to little aptitude for schooling, and was expelled from Dulwich College, London. In 1919 he assumed management of the family wine business but in 1931, after a decline in business due to the depression, he began writing.His first book, The Forbidden Territory, became a bestseller overnight, and since then his books have sold over 50 million copies worldwide. During the 1960s, his publishers sold one million copies of Wheatley titles per year, and his Gregory Sallust series was one of the main inspirations for Ian Fleming's James Bond stories.During the Second World War, Wheatley was a member of the London Controlling Section, which secretly coordinated strategic military deception and cover plans. His literary talents gained him employment with planning staffs for the War Office. He wrote numerous papers for the War Office, including suggestions for dealing with a German invasion of Britain.Dennis Wheatley died on 11th November 1977. During his life he wrote over 70 books and sold over 50 million copies.