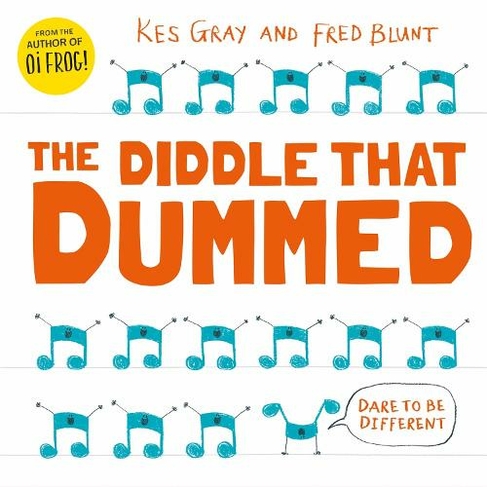 A laugh-out-loud musical story full of hilarious word play and silliness from the author of Oi Frog!, brilliantly illustrated by Fred Blunt. Flinty Bo Diddle is writing a tune for his fiddle. All his diddles have lined up nicely - except for one who keeps going DUM, right in the middle! No matter what he tries he just can't get this diddle to diddle like it's supposed to! A story about standing out from the crowd that will have you in fits of giggles! Kes Gray is the author of the top ten bestselling series Oi Frog and Friends, which has sold 1.4 million copies to date.

Kes Gray is a bestselling, multi award-winning author of more than 70 books for children. He eats Ideaflakes for breakfast, spreads silliness on his toast and lives in a place called Different. Kes was the second bestselling picture book author in 2018.Oi Frog!, Oi Dog!, Oi Cat! and Oi Duck-billed Platypus! are a top ten bestselling series. Oi Dog! won the Laugh Out Loud Picture Book Award and was shortlisted for the Sainsbury's Children's Book Award and the British Book Award, amongst others. It also won the Teach Primary New Children's Fiction Award, MadeForMums Award, Bishop's Stortford Picture Book Award and Portsmouth Picture Book Award. Oi Cat! was the Independent Booksellers Children's Book of the Season and Oi Goat! was the number one bestselling World Book Day book in 2018. Oi Frog! received a Silver Award at the Nielsen Bookscan Awards 2019, and Oi Duck-billed Platypus! was shortlisted for the Children's Book of the Year at the British Book Awards 2019. Fred never wanted to be an astronaut or drive a train when he grew up. Right from the beginning he knew he wanted to draw silly pictures for a living. Some decades later, he's living the dream! Fred has worked on all manner of projects, including editorial, advertising and designing animations for the BBC. He now works mostly in children's books, including his own Captain Falsebeard and the Knightmare series with Peter Bently.