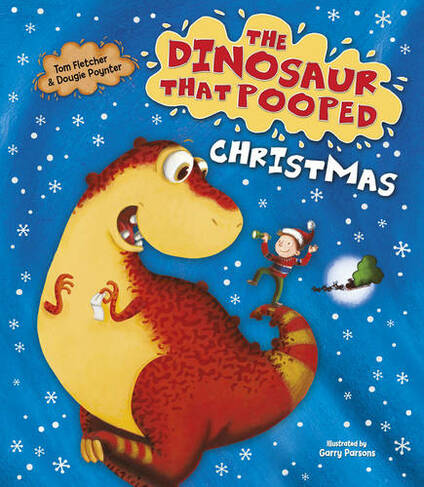 Danny wants everything for Christmas. But what he gets is a dinosaur, a very hungry dinosaur. Danny's new dino eats up all of Christmas, but as we all know, what goes in must come out . . . Danny is about to have the most EXPLOSIVE Christmas of his life! There's poop, presents and prehistoric creatures in this festive feast!

Tom Fletcher (Author) Tom Fletcher is one of the UK's bestselling authors for children. The Christmasaurus was the biggest debut middle-grade novel of 2016 and was shortlisted for a British Book Award, and The Creakers was a number one bestseller. Tom is also the bestselling author of the Who's in Your Book? picture book series, as well as one half of the author duo behind the Dinosaur that Pooped picture book series, which has sold over a million copies. Tom's books have been translated into thirty-three languages and counting. He is also a music-making, song-writing, guitar-playing, Guinness World Record-holding, nappy changing, galaxy-defending dad!Dougie Poynter (Author) Dougie Poynter has been obsessed with dinosaurs ever since visiting the Natural History Museum when he was about three. He is passionate about the natural world and a keen conservationist, working with charities such as WWF and Greenpeace to get harmful products banned and to clean up the planet.Dougie wrote songs together with Tom Fletcher for years in bands McFly and McBusted; they now write their bestselling Dinosaur that Pooped books in the same way that they write their song lyrics. The books have sold over a million copies!Garry Parsons (Illustrator) Garry Parsons is an award-winning illustrator of books for children, including the bestselling The Dinosaur That Pooped series. Garry's illustrations have accompanied the words of many prestigious picture-book authors, including Kes Gray, Ian Whybrow and Peter Bently. He has also illustrated the popular fiction series The Dragonsitter by Josh Lacey and the space adventure series George's Secret Key to the Universe by Lucy and Stephen Hawking for slightly older readers. Garry lives in London with his young family and old dog.