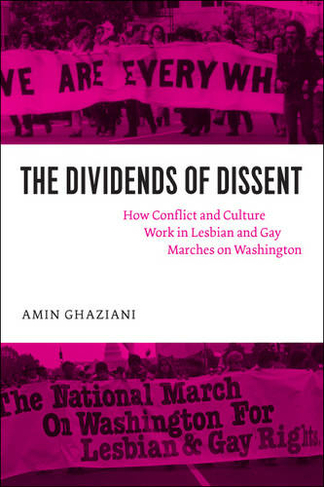 Marching on Washington is a hallowed tradition of American political protest, and demonstrations led by the women's rights, civil rights, and antiwar movements all endure in popular memory. Between 1979 and 2000 four major lesbian and gay demonstrations took place there, and while these marches were some of the largest of their time, they have been sorely overlooked - until now. Drawing on extensive archival research, historical data, original photographs, interviews with key activists, and more than a thousand news articles, "The Dividends of Dissent" offers a thorough analysis - descriptive, historical, and sociological - of these marches and their organization.Amin Ghaziani ably puts these demonstrations into their cultural context, chronicling gay and lesbian life at the time and the political currents that prompted the protests. He then turns to each march in detail, focusing on the role that internal dissent played in its organization. Ultimately, Ghaziani concludes that infighting can contribute positively to the development of social movements, and that the debates over the marches helped define what it means to be gay in the United States. 18 halftones, 17 line drawings, 12 tables

Amin Ghaziani is currently visiting assistant professor in the Department of Sociology at Northwestern University.