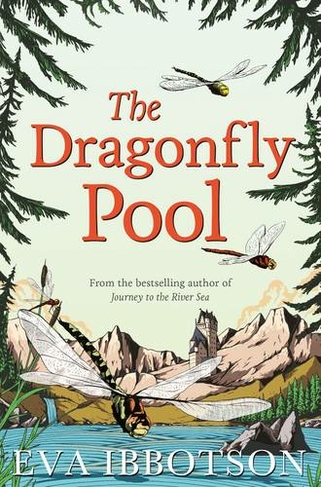 The Dragonfly Pool by Eva Ibbotson is an enchanting tale of friendship and determination during the Second World War, from the author of The Star of Kazan. Tally Hamilton is furious to hear she is being sent from London to a horrid, stuffy boarding school in the countryside. And all because of the stupid war. But Delderton Hall is a far more interesting place than Tally ever imagined, and an exciting school trip to the beautiful and luscious kingdom of Bergania whisks Tally into an unexpected adventure . . . will she be able to save her new friend, Prince Karil, before it's too late? EU Toy Safety Directive - No warning EU Toy Safety Directive - Carries minimum age warning

Eva Ibbotson was born in Vienna in 1925 and moved to England with her father when the Nazis came to power. Ibbotson wrote more than twenty books for children and young adults, many of which garnered nominations for major awards for children's literature in the UK, including the Nestle Smarties Book Prize and the Whitbread Prize. Eva's critically acclaimed Journey to the River Sea won the Smarties Gold Medal in 2001. Set in the Amazon, it was written in honour of her deceased husband Alan, a former naturalist. Imaginative and humorous, Eva's books often convey her love of nature, in particular the Austrian countryside, which is evident in works such as The Star of Kazan and A Song for Summer. Eva passed away at her home in Newcastle on 20 October 2010.