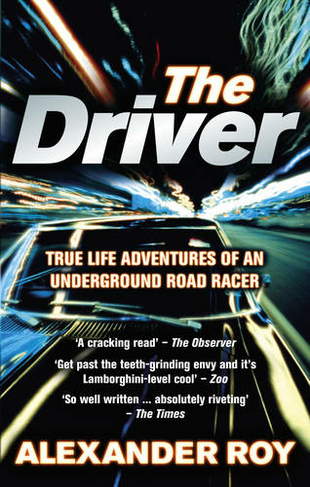 The Driver: True Life Adventures of an Underground Road Racer

On his deathbed, Alex Roy's father dropped tantalizing hints about the notorious Cannonball Run of the 1970s, the utterly illegal high-speed non-stop races from New York to LA. Inspired by his father's dying words, and against the advice of his friends, Roy enters this mysterious world - trying both to find himself, and to locate 'The Driver' - the anonymous organizer of the world's ultimate car race. In this riveting memoir, Roy straps you into his highly modified BMW M5, takes you on a terrifying 120 mph lap of Manhattan, then tackles the Gumball 3000 and the Bullrun - the two most infamous road rallies in the world. His bogus Polizei Autobahn Interceptor sticks out among the Lamborghinis and Ferraris driven by millionaire playboys, software moguls, Arab princes, movie stars, leggy Czech supermodels, gearheads, and tech whizzes. Armed with myriad radar detectors, laser jammers and police scanners, and his trunk crammed with a variety of fake uniforms, the obsessively prepared Roy evades arrest at almost every turn, wreaking havoc on his fiercest rivals and gaining the admiration of police forces around the globe. Filled with insane driving and Roy's quixotic quest to win both for his late father and himself, The Driver is the tale of one man's insatiable drive beyond life in the fast lane.

Alexander Roy has been driving in international road rallies since 2003 and finished first in the 2006 Gumball 3000. With his shaved head and ability to out-think his fellow rally participants, he is known as the Dr. Evil of the road rally scene. Roy is producing and will also be featured in the upcoming movie 32 Hours, 7 Minutes, about the legendary fastest drive from New York to LA in 1983, and Roy's effort to discover the truth behind the legend. When he is not racing around the world he lives in New York City.http://www.teampolizei.com