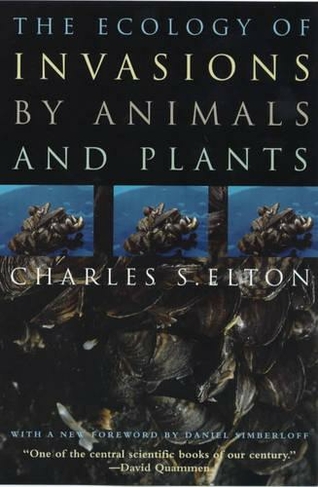 The Ecology of Invasions by Animals and Plants: (New edition)

Much as Rachel Carson's Silent Spring was a call to action against the pesticides that were devastating bird populations, Charles S. Elton's classic The Ecology of Invasions by Animals and Plants sounded an early warning about an environmental catastrophe that has become all too familiar today-the invasion of nonnative species. From kudzu to zebra mussels to Asian long-horned beetles, nonnative species are colonizing new habitats around the world at an alarming rate thanks to accidental and intentional human intervention. One of the leading causes of extinctions of native animals and plants, invasive species also wreak severe economic havoc, causing $79 billion worth of damage in the United States alone. Elton explains the devastating effects that invasive species can have on local ecosystems in clear, concise language and with numerous examples. The first book on invasion biology, and still the most cited, Elton's masterpiece provides an accessible, engaging introduction to one of the most important environmental crises of our time. Charles S. Elton was one of the founders of ecology, who also established and led Oxford University's Bureau of Animal Population. His work has influenced generations of ecologists and zoologists, and his publications remain central to the literature in modern biology. "History has caught up with Charles Elton's foresight, and The Ecology of Invasions can now be seen as one of the central scientific books of our century."-David Quammen, from the Foreword to Killer Algae: The True Tale of a Biological Invasion 42ill.

Charles Elton established and led Oxford University's influential Bureau of Animal Population. He was the author of a number of books, among them"Animal Ecology," published by the University of Chicago Press."