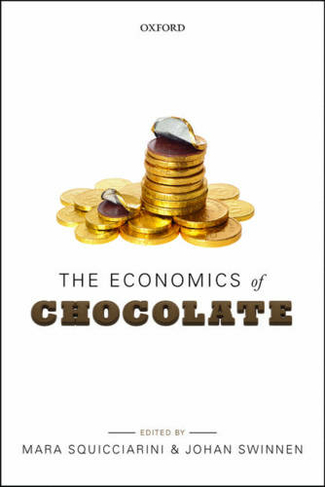 The Economics of Chocolate

Also available on eBook for £16.19. Click here to purchase from Rakuten Kobo

This book, written by global experts, provides a comprehensive and topical analysis on the economics of chocolate. While the main approach is economic analysis, there are important contributions from other disciplines, including psychology, history, government, nutrition, and geography. The chapters are organized around several themes, including the history of cocoa and chocolate - from cocoa drinks in the Maya empire to the growing sales of Belgian chocolates in China; how governments have used cocoa and chocolate as a source of tax revenue and have regulated chocolate (and defined it by law) to protect consumers' health from fraud and industries from competition; how the poor cocoa producers in developing countries are linked through trade and multinational companies with rich consumers in industrialized countries; and how the rise of consumption in emerging markets (China, India, and Africa) is causing a major boom in global demand and prices, and a potential shortage of the world's chocolate. Figures and Tables

Mara P. Squicciarini is an Assistant Professor in the Department of Economics at Bocconi University and a research affiliate at the CEPR, the Dondena Research Center, IGIER, and LICOS. She received a BSc in Economics from Bocconi University, a joint MSc in Economics from Bocconi University and Universite catholique de Louvain, and a Ph.D. in Economics from the University of Leuven. She has also been a Postdoctoral Researcher at Northwestern University andVisiting Researcher at Stanford University and at UCLA. Her research has appeared in journals such as Science, Nature, and The Quarterly Journal of Economics and has been profiled in media outlets such as The Economist, The Financial Times, Harvard Business Review, Freakonomics.Johan Swinnen is Professor of Economics and Director of the LICOS-Centre for Institutions and Economic Performance at the University of Leuven; a Visiting Scholar at the Centre for Food Security and the Environment at Stanford University; and President of the International Association of Agricultural Economists and of The Beeronomics Society. He has published widely on global food security, political economy, institutional reform, trade, global value chains, and product standards. His booksinclude Quality Standards, Value Chains and International Development, Political Power and Economic Policy, From Marx and Mao to the Market, and The Economics of Beer.