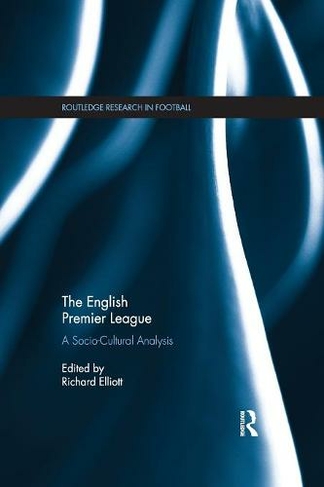 The English Premier League (EPL) is one of the world's most valuable and high-profile sports leagues, with millions of fans around the globe. The 2016/17 season marked the 25th anniversary of the EPL, providing a unique opportunity to reflect on how it has contributed, both positively and negatively, to key developments in football - and in sport and culture more broadly - at local, national and global levels. Drawing on central themes in the social scientific study of sport, such as globalisation, celebrity, fandom, commercialisation, gender, sexuality and race, this book is the first to assess the historical development and current significance of the EPL. With original contributions from several of the world's leading football scholars, it provides in-depth case studies of the multifaceted role of the EPL in the contemporary world of sport, as well as offering thought-provoking predications for the future challenges that it will face. The English Premier League: A Socio-Cultural Analysis is a fascinating read for any sport studies student or scholar with a particular interest in football and the sociology of sport. 3 Tables, black and white; 3 Illustrations, black and white

Richard Elliott is Associate Professor and Director of the Lawrie McMenemy Centre for Football Research at Southampton Solent University, UK. He received his PhD from Loughborough University. His expertise lies in the areas of globalisation and migration in football and he is co-editor (with John Harris) of Football and Migration: Perspectives, Places, Players (Routledge, 2015). Regularly consulted by the professional football industry, he has worked in conjunction with the Football Association, the Premier League, the Professional Footballers' Association, the League Managers Association and professional clubs. He has also appeared on radio and television in the UK and internationally