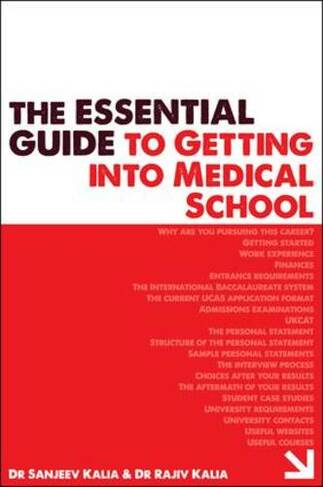 The Essential Guide to Getting into Medical School

Also available on eBook for £16.19. Click here to purchase from Rakuten Kobo

This is a concise guide to getting into medical school. It covers everything you need to know without the long-winded explanations found in other books and online. The Essential Guide to Getting into Medical School prepares you for all eventualities, so you can be ready for every aspect of your application and address any shortcomings you may have which may otherwise hinder your chances. It offers helpful tips, tactics, questions and warnings to assist with decision making and personal preparedness. This book is ideal for students of any age, from GCSE onwards, including those applying as postgraduate students. It is also highly recommended for international students wanting detailed advice on how to secure admission.

Dr Sanjeev Kalia is currently working in the West Midlands in his final year as a General Practice Associate in Training. He attended the University of Leicester, graduating with a BSc (Hons) in Biological Sciences (Physiology) in 2002, before undertaking an MSc and Diploma in Molecular Biology and Pathology in Viruses a year later at Imperial College, London. He then went on to read medicine at Hull York Medical School, qualifying with an MBBS in 2008. Dr Rajiv Kalia works in Lichfield as a partner in a general practice and participates in undergraduate training as a tutor at Birmingham Medical School. He attended King Edward the Sixth School in Birmingham, and graduated from the University of Birmingham Medical School in 2007 with an MBChB. Both authors used the techniques in this book to secure entry into medical school, and have helped others do the same. It is as a result of these repeated successes that they feel they are able to provide assistance to others from a variety of backgrounds. The fact that one author entered medical school straight after his A levels and the other as a postgraduate entrant has enforced their belief that these techniques are practical and do work for a variety of educational backgrounds.