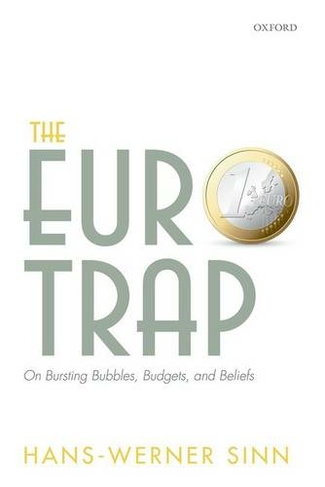 The Euro Trap On Bursting Bubbles, Budgets, and Beliefs

This book offers a critical assessment of the history of the euro, its crisis, and the rescue measures taken by the European Central Bank and the community of states. The euro induced huge capital flows from the northern to the southern countries of the Eurozone that triggered an inflationary credit bubble in the latter, deprived them of their competitiveness, and made them vulnerable to the financial crisis that spilled over from the US in 2007 and 2008. As private capital shied away from the southern countries, the ECB helped out by providing credit from the local money-printing presses. The ECB became heavily exposed to investment risks in the process, and subsequently had to be bailed out by intergovernmental rescue operations that provided replacement credit for the ECB credit, which itself had replaced the dwindling private credit. The interventions stretched the legal strictures stipulated by the Maastricht Treaty which, in the absence of a European federal state, had granted the ECB a very limited mandate. These interventions created a path dependency that effectively made parliaments vicarious agents of the ECB's Governing Council. This book describes what the author considers to be a dangerous political process that undermines both the market economy and democracy, without solving southern Europe's competitiveness problem. It argues that the Eurozone has to rethink its rules of conduct by limiting the role of the ECB, exiting the regime of soft budget constraints and writing off public and bank debt to help the crisis countries breathe again. At the same time, the Eurosystem should become more flexible by offering its members the option of exiting and re-entering the euro - something between the dollar and the Bretton Woods system - until it eventually turns into a federation with a strong political power centre and a uniform currency like the dollar. 59 Figures and 5 Tables

Hans-Werner Sinn is Professor of Economics and Public Finance at the University of Munich, President of the Ifo Institute - Leibniz-Institute for Economic Research, Director of the University of Munich's Center for Economic Studies, and President of CESifo. He is a member of the Council of Economic Advisors to the German Ministry of Economics as well as former president of the International Institute of Public Finance (IIPF) and of the Verein fur Socialpolitik,the association of German-speaking economists. He holds honorary doctorate degrees from the universities of Magdeburg, Helsinki, and the HHL Leipzig Graduate School of Management, and has been knighted with the Maximilian Order. He is the author of more than 20 monographs and 135 scientific articles. TheBritish newspaper The Independent nominated him as one of the "ten people who changed the world " in 2011. The German Business weekly Wirtschaftswoche ranked Sinn 62 among the 100 most powerful people in Germany.