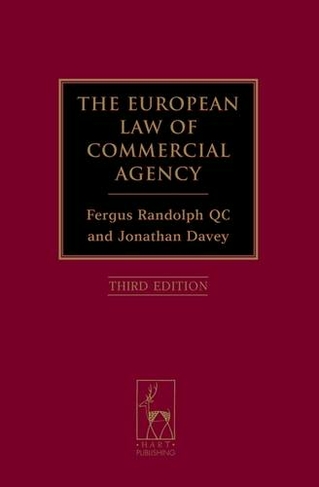 This is the third edition of the leading work on European commercial agency, by two practising lawyers who have been involved in many of the leading cases since the adoption of the European Directive on self-employed commercial agents. Since the previous edition there has been a string of important cases which have helped to clarify previously confused issues but even now some of the case law remains unsatisfactory. In this third edition of their work, Randolph and Davey have once again drawn out the consistent threads in the case law to predict the likely approach of the courts, both at UK and EU level, to those issues which still remain undecided. The approach adopted in the earlier editions of tackling difficult issues head-on and suggesting concrete answers to practitioners has once again been carried through into the third edition. As well as including references to all the relevant cases in the text, the work now includes a new chapter on the valuation of businesses by Dr Ruth Bender of the Cranfield School of Management, as well as an up-to-date version of the chapter on French law by Dr Severine Saintier of Sheffield University and on German law by Dr Michael Reiling, Rechtsanwalt, Noerr LLP.

Fergus Randolph QC practises as a Barrister specialising in EU law from Brick Court Chambers, London and Brussels. Jonathan Davey is Partner and Head of the Commercial Group at Addleshaw Goddard.