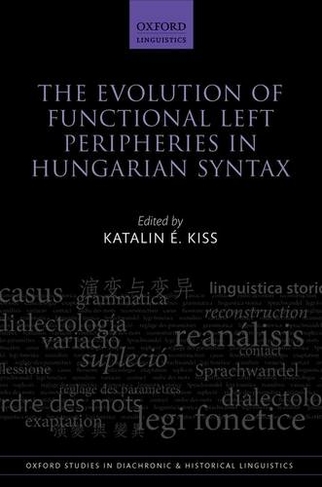 The Evolution of Functional Left Peripheries in Hungarian Syntax 11

This book adopts a generative framework to investigate the diachronic syntax of Hungarian, one of only a handful of non-Indo-European languages with a documented history spanning more than 800 years. Professor E. Kiss and several internationally recognized experts in the field bring together the best in traditional descriptive linguistics and the state-of-the-art in theoretical linguistics to offer an indepth and original survey of some of the most important structural changes in the history of Hungarian. The book specifically focuses on the restructuring of Hungarian syntax from head-final to head-initial, which started in the Proto-Hungarian age. This development led to fundamental structural changes, resulting in the evolution of functional left peripheries on various levels of syntactic structure by the 16th century. Chapters examine a number of related topics, including the emergence of focus, topic, and negative quantifiers, the marking of definiteness, universal quantifiers, and non-finite and finite subordination. The mechanisms of change are those observed in Indo-European languages (reanalysis, grammaticalization, cyclicity), but the paths of change have often been different. The book will be of interest to researchers and graduate students working in historical and diachronic linguistics, as well as all those interested in the mechanisms and theory of linguistic change.

Katalin E. Kiss is Professor at the Research Institute for Linguistics of the Hungarian Academy of Sciences, and at Pazmany Peter Catholic University, where she is also head of the Doctoral School in Linguistics. Her publications include The Syntax of Hungarian (CUP, 2002), Discourse-Configurational Languages (OUP, 1995), Event Structure and the Left Periphery (Springer, 2006), and Adverbs and Adverbial Adjuncts atthe Interfaces (De Gruyter, 2009).