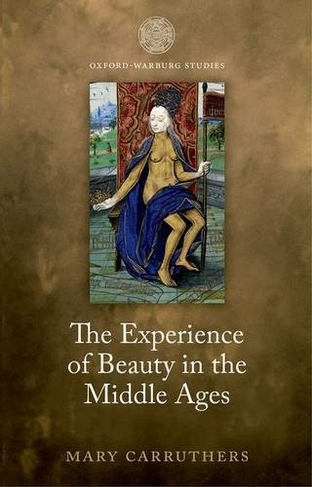 The Experience of Beauty in the Middle Ages

This book articulates a new approach to medieval aesthetic values, emphasizing the sensory and emotional basis of all medieval arts, their love of play and fine craftsmanship, of puzzles, and of strong contrasts. Written for a general educated audience as well as students and scholars in the field, it offers an understanding of medieval literature and art that is rooted in the perceptions and feelings of ordinary life, made up of play and laughter as well as serious work. Medieval 11 colour and black and white plates

Mary Carruthers studies memory training and rhetorical practices of the Middle Ages, in universities and monasteries, clerical and court cultures, focussing in particular on compositional and performative practice in the arts of the twelfth through the mid-fifteenth centuries in Europe. Her work has been fruitful to scholars in a number of other disciplines besides literature, including cultural history, comparative religion, the history of psychology and education,art and architecture history, and musicology. She received her BA from Wellesley College and her PhD from Yale University, both in English language and literature, though her work now is mainly with Latin materials. She retired from New York University in 2011. In Oxford she has been George EastmanVisiting Professor and Fellow of All Souls College. She is a Corresponding Fellow of the British Academy and a Fellow of the Medieval Academy of America.