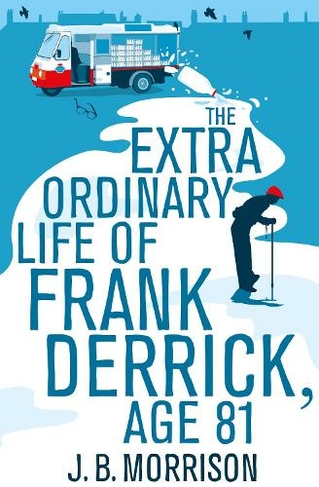 Frank Derrick is eighty-one. And he's just been run over by a milk float. It was tough enough to fill the hours of the day when he was active. But now he's broken his arm and fractured his foot, it looks set to be a very long few weeks ahead. Frank lives with his cat Bill (which made more sense before Ben died) in the typically British town of Fullwind-on-Sea. He watches DVDs, spends his money frivolously at the local charity shop and desperately tries to avoid cold callers continually knocking on his door. Then a breath of fresh air comes into his life in the form of Kelly Christmas, home help. With her little blue car and appalling parking, her cheerful resilience and ability to laugh at his jokes, Kelly changes Frank's extra ordinary life. She reminds him that there is a world beyond the four walls of his flat and that adventures, however small, come to people of all ages. Frank and Kelly's story is sad and funny, moving, familiar, uplifting. It is a small and perfect look at a life neither remarkable nor disastrous, but completely extraordinary nonetheless. For fans of The Unlikely Pilgrimage of Harold Fry, The Extra Ordinary Life of Frank Derrick, Age 81 by J. B. Morrison is a quirky, life-affirming story that has enormous appeal. And it's guaranteed to make you laugh.

Born in London ages ago to his two parents, Frank and Jenny, J.B. Morrison is a musician and already the author of two novels - Storage Stories and Driving Jarvis Ham. Goodnight Jim Bob is an autobiographical account of his ten years as singer with punk-pop band Carter The Unstoppable Sex Machine.With Carter USM J. B. Morrison had 14 top 40 singles and a number one album. He played all over the world, headlined Glastonbury and was sued by The Rolling Stones. He's also made a ton of solo albums and wrote a screenplay for a film. Plus he was in a musical, in 2010 at the Edinburgh Fringe.Is there no end to his talents? Yes. Everything not mentioned here. Don't ask him to put up a shelf or cook you dinner. The shelf will fall off the wall and you won't like the food.