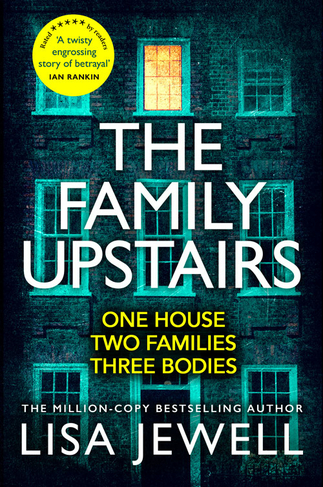 'Really good, gripping. I couldn't bear for it to finish... I don't want to move onto the next book too soon as it feels like a betrayal.' OLIVIA COLMAN 'I swear I didn't breathe the whole time I was reading it. Gripping, pacy, brilliantly twisty.' CLARE MACKINTOSH 'A twisty and engrossing story of betrayal and redemption.' IAN RANKIN ____________________ FROM THE #1 BESTSELLING AUTHOR OF INVISIBLE GIRL In a large house in London's fashionable Chelsea, a baby is awake in her cot. Well-fed and cared for, she is happily waiting for someone to pick her up. In the kitchen lie three decomposing corpses. Close to them is a hastily scrawled note. They've been dead for several days. Who has been looking after the baby? And where did they go? Two entangled families. A house with the darkest of secrets. A compulsive thriller from Lisa Jewell. ____________________ 'Rich, dark and intricately twisted, this enthralling whodunnit mixes family saga with domestic noir to brilliantly chilling effect.' RUTH WARE 'You don't read a Lisa Jewell book, you fall into it. It takes huge talent to establish a whole world in the turn of two pages.' ERIN KELLY 'Creepy, intricate and utterly immersive: an excellent holiday read.' GUARDIAN 'I had an unrelentingly pleasurable and thrilling for-God's-sake-tell-me-what-happened sensation in my stomach for the entire read ... Stupendous!' RUTH JONES 'Absolutely brilliant. Great characterisation, a fascinating and dark set up and a great conclusion. She's always great but this is next level stuff.' SARAH PINBOROUGH 'Few writers of psychological suspense devise such swift, slippery plots; fewer still people their stories with characters so human and complex. Lisa's Jewell's The Family Upstairs glitters like a blade and cuts even deeper.' AJ FINN 'Whenever I pick up a Lisa Jewell novel I know I'm in for a compelling, immersive and unputdownable read and The Family Upstairs is one of her very best' CL TAYLOR 'I had hoped to save The Family Upstairs for my holiday, but failed miserably ... I was hooked from the first page. I think it's her best yet and hands down my favourite book so far this year.' ALICE FEENEY 'Utterly compelling. Deliciously dark and twisty with characters who live on in your head. Lisa Jewell just keeps getting better and better.' JANE CORRY 'It's absolutely bloody brilliant and I can't tell you much I wish I'd written it.' TAMMY COHEN 'It's SO GOOD!' INDIA KNIGHT 'I loved The Family Upstairs!' SARAH JESSICA PARKER ____________________ Readers are obsessed with The Family Upstairs: 'I read so many books in the crime/mystery genre that it becomes harder to find a book that stands out. This one succeeded!! Hooked from page one' 'I totally adored this book. All of Lisa Jewell's books are fabulous, but something about this one is extra special.' 'Absolutely absorbing ... thoroughly enjoyed it' 'Kept me captivated from the very beginning ... Definitely worth reading - as long you like reading into the night!' 'What a book. Clever would be an understatement. And those last pages left me with chills. The concept had me intrigued and the execution had me captivated. I COULD NOT PUT THIS BOOK DOWN!' #1 Bestseller in the UK, Sunday Times, August 2019

Lisa Jewell was born in London. Her first novel, Ralph's Party, was the bestselling debut novel of 1999. Since then she has published another sixteen novels, most recently a number of dark psychological thrillers, including The Girls and Then She Was Gone (both of which were Richard & Judy Book Club picks) as well as I Found You and Watching You. Lisa is a top ten New York Times and number one Sunday Times bestselling author who has been published worldwide in over twenty-five languages. She lives in north London with her husband, two daughters, two cats, two guinea pigs and the best dog in the world.