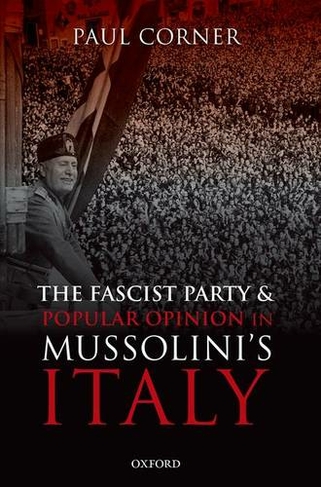 The Fascist Party and Popular Opinion in Mussolini's Italy

The question of how ordinary people related to totalitarian regimes is still far from being answered. The tension between repression and consensus makes analysis difficult; where one ends and the other begins is never easy to determine. In the case of fascist Italy, recent scholarship has tended to tilt the balance in favour of popular consensus for the regime, identifying in the novel ideological and cultural aspects of Mussolini's rule a 'political religion' which bound the population to the fascist leader. The Fascist Party and Popular Opinion in Mussolini's Italy presents a different picture. While not underestimating the force of ideological factors, Paul Corner argues that 'real existing Fascism', as lived by a large part of the population, was in fact an increasingly negative experience and reflected few of those colourful and attractive features of fascist propaganda which have induced more favourable interpretations of the regime. Distinguishing clearly between the fascist project and its realisation, Corner examines the ways in which the fascist party asserted itself at the local level in the widely-differing areas of Italy, at its corruption and malfunctioning, and at the mounting wave of popular resentment against it during the course of the 1930s - resentment and hostility which, in effect, signalled the failure of the project. The Fascist Party and Popular Opinion in Mussolini's Italy, based largely on unpublished archival material, concludes by suggesting that the abuse of power by fascists mirrors much wider problems in Italy related to the relationship between the public and the private and to the modes of utilisation of power, both in the past and in the present.

Educated at the universities of Cambridge and Oxford, Paul Corner has taught in Borneo, England, and Italy. He was research fellow at St. Antony's College, Oxford, then Director of the Centre for the Advanced Study of Italian Society at the University of Reading, and - since 1987 - has been Professor of European History at the University of Siena in Italy where he is also Director of the Centre for the Study of Totalitarian Regimes. Author of many publicationsrelating to Italian Fascism and to totalitarianism in general, he has lectured widely on the subject in both Europe and America.