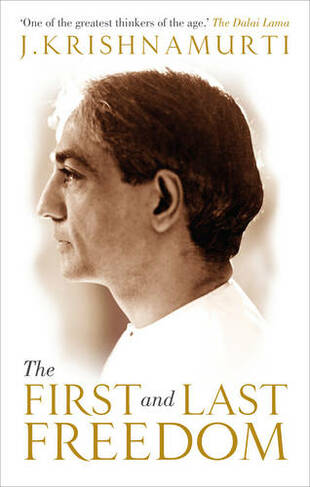 The First and Last Freedom

If truth can set us free, where do we find it? In The First and Last Freedom, Krishnamurti argues that we will not find truth in formal institutions, nor in organised religions and their dogmas, nor in any guru or outside authority; for, according to Krishnamurti, truth can only be realised through self-understanding. Controversial and challenging, yet always enlightening, Krishnamurti guides us through society's common concerns, such as suffering and fear, love and loneliness, sex and death, the meaning of life, the nature of God, and personal transformation - consistently relating these topics to the essential search for pure truth and perfect freedom. This classic philosophical and spiritual study offers wisdom and insights particularly suited to our own uncertain times.

Born in poverty in India in 1895, Jiddu Krishnamurti rose to become a leading spiritual and philosophical teacher whose ideas continue to inspire millions around the world today. Whether discussing politics with Indira Gandhi, in dialogue with the physicist David Bohm, or debating with the likes of Rupert Sheldrake and Iris Murdoch, Krishnamurti engaged fully with the human condition. Joseph Campbell, Alan Watts, Eckhart Tolle and Deepak Chopra have all acknowledged their debt to his writings. In later life, Krishnamurti spoke at the United Nations and was awarded the 1984 UN Peace Medal. He died in 1986 at his home in Ojai, California.