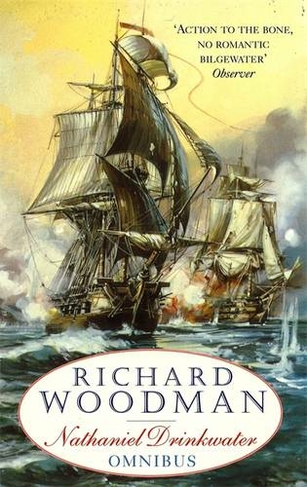 By Richard Woodman (Author)
Paperback
https://www.whsmith.co.uk/products/the-first-nathaniel-drinkwater-omnibus-an-eye-of-the-fleet-a-kings-cut/richard-woodman/paperback/9780751529791-12-000.html £10.65 rrp £12.99 Save £2.34 (18%)
GBP
Availability
In Stock
Free Delivery Available When You Spend £25 Or More
Details
Spend £25 On Eligible Products To Receive Free Standard Delivery To You Home Or Free Next Working Day Click And Collect To Store
Share

Comprising AN EYE OF THE FLEET, A KING'S CUTTER and BRIG OF WAR, this omnibus edition contains the first three Nathaniel Drinkwater chronicles. AN EYE OF THE FLEET - sees Nathaniel Drinkwater engaged in dramatic action off the coast of Spain in Admiral Rodney's famous Moonlight Battle and the capture of the Santa Teresa. But his adventures also bring rebellion on board and a perilous expedition into the Carolina swamps. A KING'S CUTTER - Clandestine operations off the coast of France aboard the twelve-gun cutter Kestrel involves Drinkwater in the French Revolution; rescuing refugees from Madame Guillotine and helping British agents infiltrate France. A BRIG OF WAR - at the request of Nelson himself, Drinkwater is despatched to the Red Sea on an urgent mission. Soon he is on a thrilling naval operation on the flank of Napoleon's Egyptian campaign.

Richard Woodman was born in London in 1944. He became an indentured midshipman in cargo liners at 16 and has sailed in a variety of ships, serving from apprentice to captain. He remains a professional sailor and in 1978 won the Marine Society's Harmer Award.