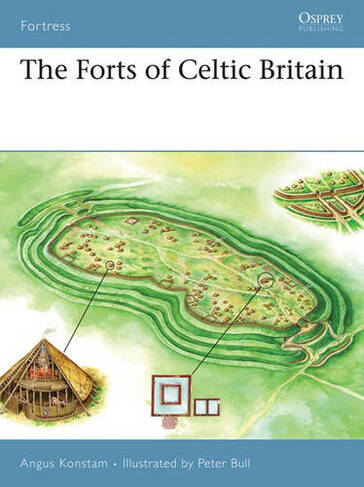 The Forts of Celtic Britain: (Fortress No. 50)

Half a millennium before the Romans first arrived in Britain an even more ferocious people, the Celts, arrived in what is now south-eastern England. The Celts remained in Britain long after the Romans departed, and although driven into the remoter corners of the island by English invaders the people who remained clung onto their Celtic heritage, and defended their remaining lands against all-comers. In order to defend their lands from other tribes or outside invaders, these people established powerful fortified sites that served as places of refuge in wartime and as administrative and trading centres in times of peace. This book examines these fascinating forts, which varied considerably from the mysterious brochs and duns found in northern Britain, to the hill-top forts ranging in size, to the promontory forts that formed powerful coastal strongholds all around the island's shores. Illustrations (chiefly col.)

Angus Konstam has written over 30 successful titles for Osprey Publishing, as well as more than 50 larger books for other publishers, including The Historic Atlas of the Celtic World (Checkmark Books, 2001). His interest in the period stems from his days as a history and archaeology honours student at Aberdeen and St. Andrews. He has also published articles on this subject in the Osprey Military Journal.