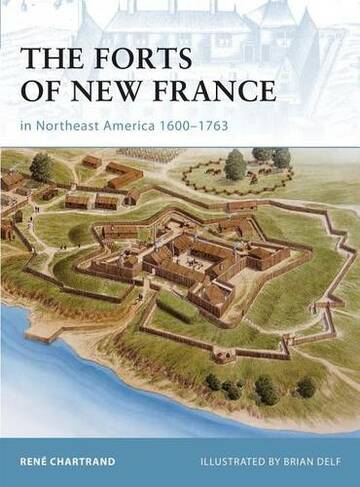 By Rene Chartrand (Author), Brian Delf (Illustrator)
Paperback
https://www.whsmith.co.uk/products/the-forts-of-new-france-in-northeast-america-16001763-fortress/rene-chartrand/brian-delf/paperback/9781846032554-01-000.html £11.95 rrp £12.99 Save £1.04 (8%)
GBP
Availability
Currently unavailable. We don't know when or if this item will be back in stock
Free Saver Delivery on orders over £20
Details
FREE SHIPPING over £20 for Saver Delivery
Share

"New France" consisted of the area colonized and ruled by France in North America from the 16th to the 18th century. At its peak in the early 18th century its territory was huge, stretching from Newfoundland to the Gulf of Mexico. This title reviews the lengthy chain of forts built to guard the French frontier in the American northeast from the province of Quebec through New York State to Pennsylvania and Indiana. Among the sites examined are forts Chambly, St. Frederic (Crown Point), Carillon (Ticonderoga), Duquesne (Pittsburgh, PA), Ouiatenon (Quebec) and Vincennes (IN). These forts, some of them well-preserved and popular tourist destinations, ranged from large and elaborate, stone-built structures with classic, Vauban-style elements, to little more than cabins surrounded by stockades. Some, such as Chambly, looked more like medieval castles in their earliest forms. Formerly Senior Curator with National Historic Sites of Canada, historian Rene Chartrand examines the different fort-types and the French military technology that went into their construction, and describes the strategic vision that led to their construction, their part in the conflicts with the British colonies in the east and the Indian nations of the interior, and their effect on trade. Illustrations (some col.)

Rene Chartrand was born in Montreal and educated in Canada, the United States and the Bahamas. A senior curator with Canada's National Historic Sites for nearly three decades, he is now a freelance writer and historical consultant. He has written numerous articles and books including over 30 Osprey titles. He lives in Gatineau, Quebec, with his wife and two sons. Brian Delf began his career working in a London art studio producing artwork for advertising and commercial publications. Since 1972, he has worked as a freelance illustrator on a variety of subjects including natural history, architecture and technical cutaways. His illlustrations have been published in over thirty countries. Brian lives and works in Oxfordshire, UK.