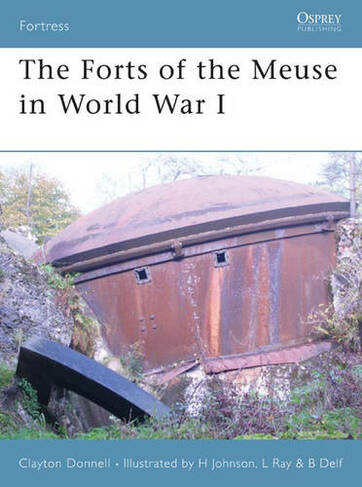 By Clayton Donnell (Author), Hugh Johnson (Illustrator)
Paperback
https://www.whsmith.co.uk/products/the-forts-of-the-meuse-in-world-war-i--fortress-no-60/clayton-donnell/hugh-johnson/paperback/9781846031144-01-000.html £11.95 rrp £12.99 Save £1.04 (8%)
GBP
Availability
Currently unavailable. We don't know when or if this item will be back in stock
Free Saver Delivery on orders over £20
Details
FREE SHIPPING over £20 for Saver Delivery
Share

On 29 October 1891, the new forts built around the cities of Liege and Namur, known as the 'Forts of the Meuse,' were turned over to the Belgian Army. This huge project, the brainchild of General Henri Brialmont, produced 21 modern concrete and steel forts, which could defend the strategic rail, river and road arteries in the Oise and Condroz gaps. In August 1914, the German Army attempted a quick crossing of this area in order to reach France, but it took them 12 crucial days to destroy the fortresses, with the 30,000 Belgian troops putting up a valiant fight. Containing maps, diagrams and photographs taken from private collections, this book explores the design, development and influence of the 'Forts of the Meuse,' and highlights the importance of their role during the opening battle of World War I. Illustrations (chiefly col.), maps

Clayton Donnell has been a student of history for the past 25 years. He grew up in the United States but spent several years in Europe, where, at an early age, he acquired what would become a lifelong interest in the study of fortifications. He collaborated on a recent bibliography on European fortifications and has written articles on the Maginot Line and the Forts of Belgium. His was the first English language website on the Maginot Line, and he also has an extensive site on the Battle of Liege in August 1914. Clayton is married with three children and resides in Southeastern Pennsylvania. He is retired from the US Air Force. This is his first book for Osprey Publishing. The author lives in Southhampton, USA.