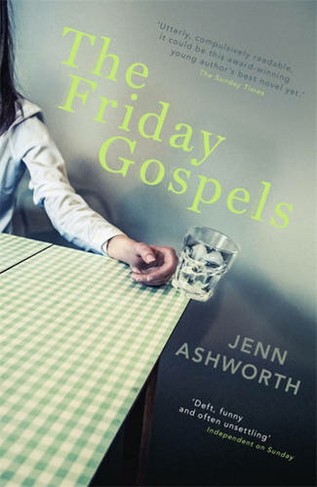 By Jenn Ashworth (Author)
Paperback
https://www.whsmith.co.uk/products/the-friday-gospels/jenn-ashworth/paperback/9781444707748-12-000.html £8.19 rrp £9.99 Save £1.80 (18%)
GBP
Availability
In Stock
Free Delivery Available When You Spend £25 Or More
Details
Spend £25 On Eligible Products To Receive Free Standard Delivery To You Home Or Free Next Working Day Click And Collect To Store
Share

It's Friday in the Leeke household, but this is no ordinary Friday and the Leekes are a little unusual: they are Lancastrian Mormons, and this evening their son Gary will return from 2 years as a missionary in Salt Lake City. His mother is planning a celebratory dinner - with difficulty, since she's virtually housebound with an undiagnosed, embarrassing condition. What she doesn't realise is that the rest of the family - her meek husband, disturbed oldest son, and teenage daughter - have other plans for the evening, each involving drastic and irrevocable action. As the narrative baton passes from one Leeke to the next, disaster inexorably looms. Except that nothing goes according to plan, and the outcome is as unexpected as it is shocking. Giving a fascinating insight into the Mormon way of life, this blackly funny tale of innocence betrayed shows the havoc religion can wreak.

Jenn Ashworth was born in 1982 in Preston. She studied English at Cambridge and since then has gained an MA from Manchester University, trained as a librarian and run a prison library in Lancashire. She now lectures in Creative Writing at the University of Lancaster. Her first novel, A Kind of Intimacy, was published in 2009 and won a Betty Trask Award. In 2011 her second, Cold Light, was published by Sceptre and she was chosen by BBC's The Culture Show as one of the twelve Best New British Novelists. In 2013 her third novel, The Friday Gospels, was published to resounding critical acclaim. She lives in Lancaster with her husband, son and daughter.