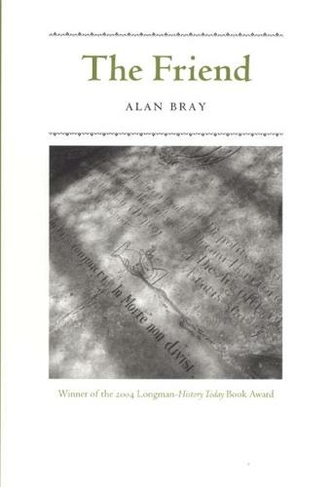 In the chapel of Christ's College, Cambridge, some twenty years ago, historian Alan Bray made an astonishing discovery: a tomb shared by two men, John Finch and Thomas Baines. The monument featured eloquent imagery dedicated to their friendship: portraits of the two friends linked by a knotted cloth. And Bray would soon learn that Finch commonly described his friendship with Baines as a connubium or marriage. There was a time, as made clear by this monument, when the English church not only revered such relations between men, but also blessed them. Taking this remarkable idea as its cue, The Friend explores the long and storied relationship between friendship and the traditional family of the church in England. This magisterial work extends from the year 1000, when Europe acquired a shape that became its enduring form, and pursues its account up to the eighteenth and nineteenth centuries. Spanning a vast array of fascinating examples, which range from memorial plaques and burial brasses to religious rites and theological imagery to classic works of philosophy and English literature, Bray shows how public uses of private affection were very common in premodern times. He debunks the now-familiar readings of friendship by historians of sexuality who project homoerotic desires onto their subjects when there were none. And perhaps most notably, he evaluates how the ethics of friendship have evolved over the centuries, from traditional emphases on loyalty to the Kantian idea of moral benevolence to the more private and sexualized idea of friendship that emerged during the modern era. Finely nuanced and elegantly conceived, The Friend is a book rich in suggestive propositions as well as eye-opening details. It will be essential reading for anyone interested in the history of England and the importance of friendship in everyday life. History Today's Book of the Year, 2004 "Bray's loving coupledom is something with a proper historical backbone, with substance and form, something you can trace over time, visible and archeologicable. . . . Bray made a great contribution in helping to bring this long history to light."-- James Davidson, London Review of Books 11 halftones

Alan Bray was an Honorary Research Fellow at Birkbeck College, University of London, when he died in 2002. He is the author of Homosexuality in Renaissance England.