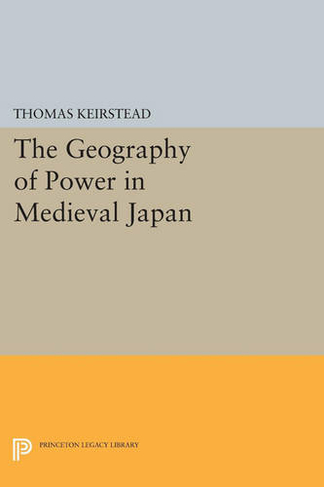 The Geography of Power in Medieval Japan: (Princeton Legacy Library)

In this reevaluation of the estate system, which has long been recognized as the central economic institution of medieval Japan, Thomas Keirstead argues that estates, or shoen, constituted more than a type of landownership. Through an examination of rent rolls, land registers, maps, and other data describing individual estates he reveals a cultural framework, one that produced and shaped meaning for residents and proprietors. Keirstead's discussion of peasant uprisings shows that the system, however, did not define a stable, closed structure, but was built upon contested terrain. Drawing on the works of Foucault,de Certeau, and Geertz, among others,this book illuminates the presuppositions about space and society that underwrote estate holding. It traces how the system reordered the social and physical landscape, establishing identity for both rulers and subjects. Estate holders, seeking to counter the fluid movement of populations across estate boundaries, pressed into service a social distinction between "peasants" and "wanderers." Peasant rebels made use of the fiction that the estate comprised a natural community in order to resist proprietorial exactions. In these instances, Keirstead contends, the estate system reveals its governing logic: social and political divisions were articulated in spatial terms; power was exercised (and contested) through geography. Originally published in 1992. The Princeton Legacy Library uses the latest print-on-demand technology to again make available previously out-of-print books from the distinguished backlist of Princeton University Press. These editions preserve the original texts of these important books while presenting them in durable paperback and hardcover editions. The goal of the Princeton Legacy Library is to vastly increase access to the rich scholarly heritage found in the thousands of books published by Princeton University Press since its founding in 1905.