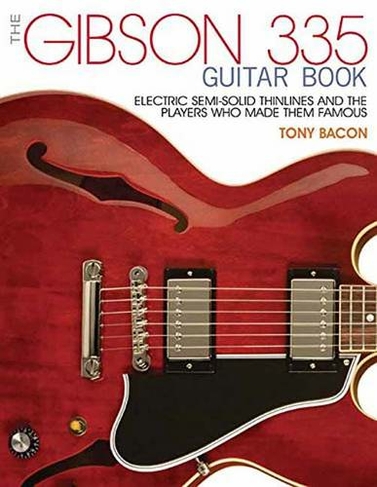 The Gibson 335 Guitar Book: Electric Semi-Solid Thinlines and the Players Who Made Them Famous

EThe Gibson 335 Guitar BookE tells the story of Gibson's ES-335 and related models as played by B.B. King Alvin Lee and Eric Clapton among other virtuosos. It's full of great guitars cool players and fascinating historical detail. The book traces the story from Gibson's first thinline models to the company's signature instruments and modern re-creations of today.THThe book is in the tradition of Tony Bacon's bestselling guitar series with a carefully researched story a gallery section of full-color pictures of the most important guitars and players and a reference section detailing production years and specifications.THThe 335 was launched in 1958. It had a double-cutaway body but the interesting features were hidden inside. A solid block in an otherwise hollow body created a new semi-solid structure cleverly combining the sonic qualities of a hollowbody guitar and a solidbody. Variants included the stereo 345 and the upscale 355 and players have lined up ever since for a taste of these attractively different flavors.THSome of those players featured in the book include Larry Carlton Dave Grohl (Foo Fighters) Peter Hayes (Black Rebel Motorcycle Club) Justin Hayward (Moody Blues) Eric Clapton Pepper Keenan (Down) B.B. King Elvin Bishop (Butterfield Blues Band) Alvin Lee (Ten Years After) Alex Lifeson (Rush) Eddie Phillips (the Creation) Johnny Marr (the Smiths) Lee Ritenour Andy Summers (the Police) Bill Nelson (Be-Bop Deluxe) and Andrew White (Kaiser Chiefs).