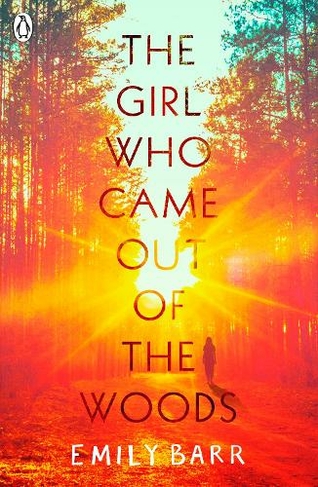 The Girl Who Came Out of the Woods

By Emily Barr (Author)
Paperback
The Girl Who Came Out of the Woods is rated 4.0 out of 5 by 1.
https://www.whsmith.co.uk/products/the-girl-who-came-out-of-the-woods/emily-barr/paperback/9780241345221-12-000.html £6.55 rrp £7.99 Save £1.44 (18%)
GBP
Availability
In Stock
Free Delivery Available When You Spend £25 Or More
Details
Spend £25 on eligible products to receive free standard delivery to home or free next working day click and collect to store
Share

TFW you wake up and realise you're trending... #GirlOutoftheWoods Arty has always lived in the Clearing, a commune hidden in the forests of south India. But her happy life, separate from the rest of the world, is shattered after a terrible event. For the first time, Arty must leave her home, and head into the intriguing but frightening outside world. On the streets of India, a chance encounter leads to her becoming an unwilling overnight celebrity. As she embarks on her journey, she discovers she is being followed by thousands of strangers, who seem to know her every move... Forced to fight against mysterious hashtags and being constantly photographed, how can she find the help she desperately needs? Everything is changing too fast for this girl who came out of the woods... could she be running into a trap? The new thriller from the acclaimed author of The One Memory of Flora Banks, perfect for fans of Karen McManus, E. Lockhart and Sophie McKenzie. Praise for The Girl Who Came Out of the Woods: 'Compelling and brilliantly written'- Fabulous Magazine 'Barr brilliantly captures Arty's naivety and eager innocence as she's swept up in the globalised world of capitalism and social media'- The Observer 'A pacey, original thriller' - The Guardian 'Arty's fresh insights into the world make for an amusing, poignant story' - The Sun

Rated 4 out of 5 by Valerian70 from The Library Bear This was such a captivating book that I found completely sucked me in to it's world. With a varied, to say the very least, cast of characters and settings it genuinely takes you on both a literal and figurative journey. I did find it a little heavy handed in places and that some of the themes were laboured upon a little too much for my taste but it was, overall, a cracking good read. There are two parallel stories being told here. One is in flashback to an unnamed person trapped in a basement and trying desperately to escape both the physical constraints of their location and the mental images that are encroaching on them. The second is an in real time telling of young Artemis emerging from her secluded live in an Indian Forest clearing. The strands are linked together by a white, fluffy teddy bear holding an I Love You Loads x heart. By far the most interesting sections are those dealing with Artemis. From the idyllic existence of her early years in the Matriarchal Society established by her mother in an isolated clearing to her emergence in to the hustle, bustle and daunting world of Mumbai. Touching on themes of innocence, betrayal and friendship it is at times touching but also quite brutal. For a large chunk of the book you have no idea who you can and cannot trust, just like Artemis. When the betrayals come, as you know they must, it is all too easy to empathise with our heroine and when things do work out for her, even if only temporarily, you do want to cheer along with her. No matter the setting the author has done a sterling job of thrusting you right in there. I have never been to Mumbai but the dusty, traffic and people clogged streets are brought to wonderful life. You can almost smell the heat and feel the dust coating your skin and throat. The descriptions of Clevedon are less successful, but perhaps this is because the setting is more familiar to me so there is less temptation to subsume yourself in the location. Somehow the author even manages to make cricket seem interesting - it really, really isn't. Very cleverly written and there is much more going on here than the surface story. It does give you lots to mull over as you read and I can whole heartedly recommend this book to not only the YA readership this has been aimed at by the publisher but by decidedly non-young A's. THIS IS AN HONEST AND UNBIASED REVIEW OF A FREE COPY OF THE BOOK PROVIDED BY THE PIGEONHOLE.

THE ONE MEMORY OF FLORA BANKS published in 2017 was Emily Barr's first novel for young adults and was a global hit, publishing in 27 languages. Before that, she worked as a journalist in London but always hankered after a quiet room and a book to write. She went travelling for a year, which gave her an idea for a novel set in the world of backpackers in Asia. This became BACKPACK, an adult thriller which won the WH Smith New Talent Award, and she has since written eleven more adult novels published in the UK and around the world. She lives in Cornwall with her husband and their children.