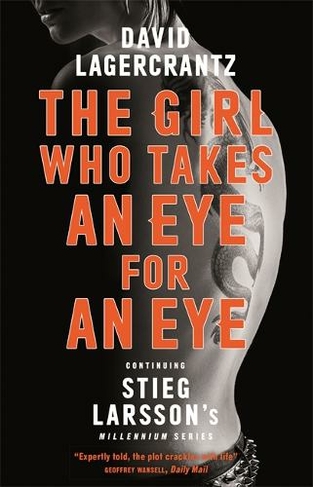 The Girl Who Takes an Eye for an Eye: A Dragon Tattoo story (Millennium)

By David Lagercrantz (Author), George Goulding (Contributor)
Paperback
The Girl Who Takes an Eye for an Eye: A Dragon Tattoo story (Millennium) is rated 5.0 out of 5 by 1.
https://www.whsmith.co.uk/products/the-girl-who-takes-an-eye-for-an-eye-continuing-stieg-larssons-dragon-tattoo-series-a-dragon-tattoo-/david-lagercrantz/george-goulding/paperback/9780857056436-12-000.html £7.37 rrp £8.99 Save £1.62 (18%)
GBP
Availability
In Stock
Free Delivery Available When You Spend £25 Or More
Details
Spend £25 on eligible products to receive free standard delivery to home or free next working day click and collect to store
Share

THE GIRL WITH THE DRAGON TATTOO LIVES ON. Lisbeth Salander is an unstoppable force: Sentenced to two months in Flodberga women's prison for saving a young boy's life by any means necessary, Salander refuses to say anything in her own defence. She has more important things on her mind. Mikael Blomkvist makes the long trip to visit every week - and receives a lead to follow for his pains. For him, it looks to be an important expose for Millennium. For her, it could unlock the facts of her childhood. Even from a corrupt prison system run largely by the inmates, Salander will stand up for what she believes in, whatever the cost. And she will seek the truth that is somehow connected with her childhood memory, of a woman with a blazing birthmark on her neck - that looked as if it had been burned by a dragon's fire . . . The tension, power and unstoppable force of The Girl Who Takes an Eye for an Eye are inspired by Stieg Larsson's Millennium trilogy, as Salander and Blomkvist continue the fight for justice that has thrilled millions of readers across the world. Translated from the Swedish by George Goulding

Rated 5 out of 5 by Mr Bizarre from The thrills carry on A good book and worthy of the series involving Elisabeth Salander...you found her a little more of her tangled history.

David Lagercrantz was born in 1962, and is an acclaimed author and journalist. In 2015 The Girl in the Spider's Web (2015), his continuation of Stieg Larsson's Millennium Trilogy, became a worldwide bestseller and was made into a film by Sony Pictures (2018). He is the author of the acclaimed and bestselling I am Zlatan Ibrahimovic, Fall of Man in Wilmslow, and the fifth and sixth books in the Millennium series, The Girl Who Takes an Eye for an Eye (2017) and The Girl Who Lived Twice (2019). George Goulding was born in Stockholm, educated in England, and spent his legal career working for a London-based law firm. He is now a translator of Swedish literature into English, including David Lagercrantz's continuations of the Millennium trilogy by Stieg Larsson.