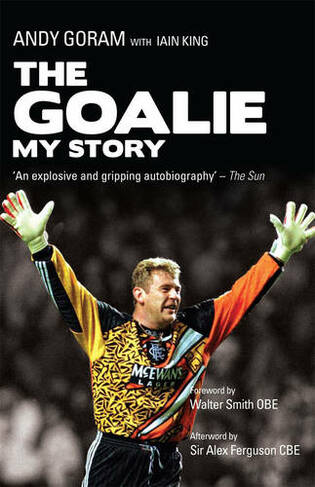 The Goalie: My Story

This is the story of a genius with flaws. Lots of them. On the field, Andy Goram was a defiant figure between the sticks who, in many ways, defined the history-making nine-in-a-row team that brought so much success to Ibrox; off it, he careered through three divorces and a welter of lurid tabloid headlines sensationalising his hellraising antics. In this no-holds-barred account, Goram lifts the lid on his tempestuous life in football, from the Gers' glory days to a fairy-tale chapter with his boyhood heroes: Manchester United. His life in the Old Firm is examined in depth, from the saves that broke former Celtic manager Tommy Burns's heart to a story that was buried until now: Celtic's astonishing bid to sign him. Goram's Scotland career ended in bitterness when he walked out on the squad before France 98, and here he smashes the myths that have always surrounded his relationships with Craig Brown and Jim Leighton. This is the inside story of the man the fans voted Rangers' greatest-ever goalkeeper. He remains a genius with flaws: a legend simply known as The Goalie. 1 x 8pp b/w

Andy Goram's playing career spanned three decades, from 1981 to 2004, during which time he played for several clubs, including Oldham Athletic, Hibernian, Rangers and Motherwell. He also won 43 international caps for Scotland. Iain King is head of sport at the Scottish Sun and has covered top-level football for the last 20 years. He is the co-author of Blue: The Barry Ferguson Story and Blue and White Dynamite: The Ian Durrant Story.