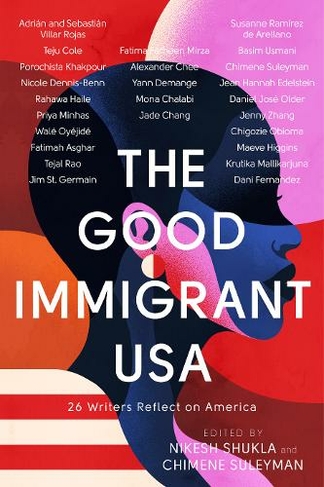 GUARDIAN MUST READ BOOKS OF 2019 'The you-gotta-read-this anthology' Stylist 'This collection showcases the joy, empathy and fierceness needed to adopt the country as one's own' Publishers Weekly An urgent collection of essays by first- and second-generation immigrants, exploring what it's like to be othered in an increasingly divided America. From Trump's proposed border wall and travel ban to the marching of White Supremacists in Charlottesville, America is consumed by tensions over immigration and the question of which bodies are welcome. In this much-anticipated follow-up to the bestselling UK edition, hailed by Zadie Smith as 'lively and vital', editors Nikesh Shukla and Chimene Suleyman hand the microphone to an incredible range of writers whose humanity and right to be in the US is under attack. Chigozie Obioma unpacks an Igbo proverb that helped him navigate his journey to America from Nigeria. Jenny Zhang analyzes cultural appropriation in nineties fashion, recalling her own pain and confusion as a teenager trying to fit in. Fatimah Asghar describes the flood of memory and emotion triggered by an encounter with an Uber driver from Kashmir. Alexander Chee writes of a visit to Korea that changed his relationship to his heritage. These writers, and the many others in this singular collection, share powerful personal stories of living between cultures and languages while struggling to figure out who they are and where they belong. By turns heartbreaking and hilarious, troubling and uplifting, the essays in The Good Immigrant USA come together to create a provocative, conversation-sparking, multi-vocal portrait of America now. Essays from: Porochista Khakpour; Nicole Dennis-Benn; Rahawa Haile; Teju Cole; Priya Minhas; Wale Oyejide; Fatimah Asghar; Tejal Rao; Maeve Higgins; Krutika Mallikarjuna; Jim St. Germain; Jenny Zhang; Chigozie Obioma; Alexander Chee; Yann Demange; Jean Hannah Edelstein; Chimene Suleyman; Basim Usmani; Daniel Jose Older; Adrian Villar Rojas; Sebastian Villar Rojas; Dani Fernandez; Fatima Farheen Mirza; Susanne Ramirez de Arellano; Mona Chalabi; Jade Chang

Nikesh Shukla (Author) Nikesh Shukla is the author of three novels. His latest, The One Who Wrote Destiny was published in 2018. His debut novel, Coconut Unlimited, was shortlisted for the Costa First Novel Award 2010. His second novel, Meatspace was released to critical acclaim in 2014. Nikesh has written for The Guardian, Observer, Independent, Esquire, Buzzfeed, Vice, BBC2, LitHub, Guernica and BBC Radio 4. Nikesh is also the editor the bestselling essay collection, The Good Immigrant which won the reader's choice at the Books Are My Bag Awards. Nikesh was one of Foreign Policy Magazine's 100 Global Thinkers and The Bookseller's 100 most influential people in publishing in 2016 and in 2017. He is the co-founder of the literary journal, The Good Journal and The Good Literary AgencyChimene Suleyman (Author) Chimene Suleyman is a writer from London who is now based in New York. As well as contributing to The Good Immigrant she has written on race politics for The Independent, International Business Times, The Debrief, The Pool, Media Diversified. TV and radio appearances include BBC Newsnight, BBC, and LBC. Her poetry collection, Outside Looking On, was included in a Guardian's Best Book of 2014 list.