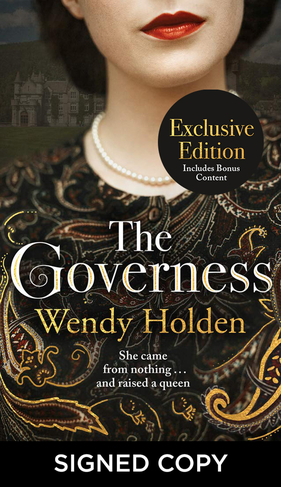 The Governess (Signed and Special Edition Copy With Bonus Content)

Signed by the author. Includes exclusive Royal A-Z bonus content. The Governess tells the story of Marion 'Crawfie' Crawford, the progressive young working-class woman who, as royal governess for seventeen years, lived on the most intimate terms with Princess Margaret and the future Queen Elizabeth II. A long time member of the Windsors' inner circle, Marion had a ringside seat to some of the most seismic events of the 20th century. The castles and palaces may have housed a family frozen in time, but outside poverty and unemployment were breeding unrest in 1930s Britain, with Hitler's ascent looming. If royalty was to survive, it must draw closer to the people. And so Marion took the princesses on tubes and buses, swimming at public baths, Christmas shopping at Woolworth's. Marion's devotion meant personal sacrifices, and years of dedication counted for nothing once she published The Little Princesses, a loving, harmless account of life as a royal governess. It earned Marion the Windsors' lasting fury. This is a look into the childhood of the world's longest reigning monarch: a story of conflict and contradiction, of state dinners and hunger marches, of a left-winger amongst the ultimate conservatives, of a modern woman in an ancient institution.

Sunday Times number one bestseller Wendy Holden was a journalist before becoming an author. She has written ten consecutive top-ten bestselling novels and sold more than 3 million books.