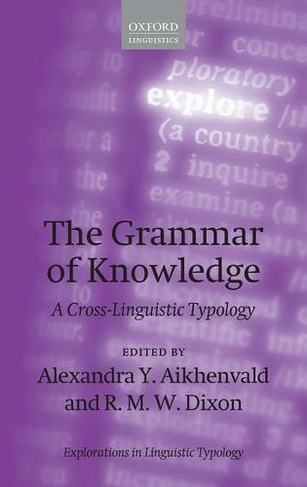 The Grammar of Knowledge offers both a linguistic and anthropological perspective on the expression of information sources, as well as inferences, assumptions, probability and possibility, and gradations of doubt and beliefs in a range of languages. The book investigates twelve different languages, from families including Tibeto-Burman, Nakh-Dagestani, and Austronesian, all of which share the property of requiring the source of information to be specified in every sentence. In these languages, it may not be possible to say merely that 'the man went fishing'. Instead, the source of evidence for the statement must also be specified, usually through the use of evidential markers. For example, it may be necessary to indicate whether the speaker saw the man go fishing; has simply assumed that the man went fishing; or was told that he went fishing by a third party. Some languages, such as Hinuq and Tatar, distinguish between first-hand and non first-hand information sources; others, such as Ersu, mark three distinct types of information - directly required, inferred or assumed, and reported. Some require an even greater level of specification: Asheninka Perene, from South America, has a specific marker to express suspicions or misgivings. Like others in the series, the book illustrates and examines these aspects of language in different cultural and linguistic settings. It will interest linguists of all persuasions as well as linguistically-minded anthropologists. 15 line drawings; 2 maps

Alexandra Y. Aikhenvald is Distinguished Professor, Australian Laureate Fellow, and Director of the Language and Culture Research Centre at James Cook University. She is a major authority on languages of the Arawak family, from northern Amazonia, and has written grammars of Bare (1995) and Warekena (1998), plus A Grammar of Tariana, from Northwest Amazonia (Cambridge University Press, 2003), in addition to essays on various typological and areal features ofSouth American languages. Her other major publications, with OUP, include Classifiers: A Typology of Noun Categorization Devices (2000), Language Contact in Amazonia(2002), Evidentiality (2004), The Manambu Language of East Sepik, Papua New Guinea, (2008), Imperatives and Commands (2010), Languages of theAmazon (2012), and The Art of Grammar (forthcoming).R. M. W. Dixon is Adjunct Professor and Deputy Director of the Language and Culture Research Centre at James Cook University. He has published grammars of a number of Australian languages (including Dyirbal and Yidin), in addition to A Grammar of Boumaa Fijian (University of Chicago Press, 1988), The Jarawara Language of Southern Amazonia (Oxford University Press, 2004;, paperback 2011) and A Semantic Approach to English Grammar (Oxford University Press, 2005).He is also the author of the three volume work Basic Linguistic Theory (Oxford University Press, 2010-12) and of an academic autobiography I am a linguist (Brill, 2011).