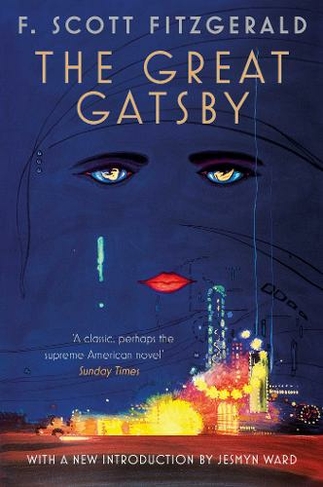 By F. Scott Fitzgerald (Author)
Paperback
https://www.whsmith.co.uk/products/the-great-gatsby/f-scott-fitzgerald/paperback/9781471173936-12-000.html £8.19 rrp £9.99 Save £1.80 (18%)
GBP
Availability
In Stock
Free Delivery Available When You Spend £25 Or More
Details
Spend £25 On Products To Receive Free Standard Delivery To Your Home Or Free Next Working Day Click And Collect To Store
Share

**The twentieth-century masterpiece, the authoritative new edition** With a new foreword by Jesmyn Ward, author of the Women's Prize-shortlisted Sing, Unburied, Sing 'There was music from my neighbour's house through the summer nights. In his blue gardens men and girls came and went like moths among the whisperings and the champagne and the stars.' Enigmatic, intriguing and fabulously wealthy, Jay Gatsby throws lavish parties at his West Egg mansion to impress Daisy Buchanan, the object of his obsession, now married to bullish Tom Buchanan. Over a Long Island summer, his neighbour Nick Carraway, a writer and a cousin to Daisy, looks on as Gatsby and Daisy's affair deepens. Tragedy looms in F. Scott Fitzgerald's masterpiece third novel, frequently named among the best novels of the twentieth century. Praise for The Great Gatsby: 'A classic, perhaps the supreme American novel' Sunday Times 'More than an American classic; it's become a defining document of the national psyche, a creation myth, the Rosetta Stone of the American dream' Guardian 'F. Scott Fitzgerald was better than he knew, for in fact and in the literary sense he invented a generation' New York Times 'An unquiet masterpiece whose mystery never fails to exert its power' Robert McCrum, Observer, 'The 100 Best Novels in English'

F. Scott Fitzgerald stands out as one of the most important American writers of the twentieth century. His masterpieces include The Beautiful and Damned, The Great Gatsby and Tender Is the Night. He was born in St Paul, Minnesota in 1896, attended Princeton University, and published his first novel, This Side of Paradise, in 1920. He and his wife Zelda divided their time between New York, Paris and the French Riviera, as part of the circle that included Gertrude Stein, Ernest Hemingway and John Dos Passos. He died in 1940, while working on The Love of the Last Tycoon, which has inspired a new drama series in development, The Last Tycoon.