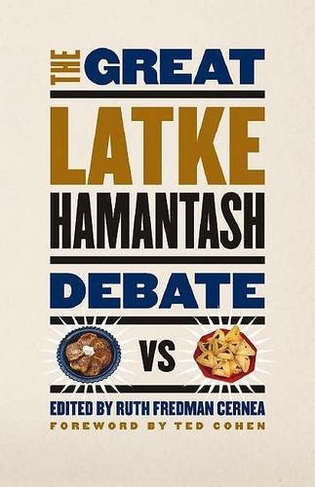 Creation versus evolution. Nature versus nurture. Free will versus determinism. Every November at the University of Chicago, the best minds in the world consider the question that ranks with these as one of the most enduring of human history: latke or hamantash? This great latke-hamantash debate, occurring every year for the past six decades, brings Nobel laureates, university presidents, and notable scholars together to debate whether the potato pancake or the triangular Purim pastry is in fact the worthier food. What began as an informal gathering is now an institution that has been replicated on campuses nationwide. Highly absurd yet deeply serious, the annual debate is an opportunity for both ethnic celebration and academic farce. In poetry, essays, jokes, and revisionist histories, members of elite American academies attack the latke-versus-hamantash question with intellectual panache and an unerring sense of humor, if not chutzpah. "The Great Latke-Hamantash Debate" is the first collection of the best of these performances, from Martha Nussbaum's paean to both foods - in the style of Hecuba's Lament - to Nobel laureate Leon Lederman's proclamation on the union of the celebrated dyad. The latke and the hamantash are here revealed as playing a critical role in everything from Chinese history to the Renaissance, the works of Jane Austen to constitutional law. Eminent philosopher and humorist Ted Cohen supplies a wry foreword, and anthropologist Ruth Fredman Cernea provides a larger context with her overview of the Jewish holidays, recipes, and a glossary of Yiddish and Hebrew terms, making the book accessible even to the uninitiated. The University of Chicago may have split the atom in 1942, but it's still working on the equally significant issue of the latke versus the hamantash. tab 1line drawing

Ruth Fredman Cernea is an anthropologist and the author of The Passover Seder and Two Promised Lands: Baghdadi Jews in Burma. She is the former international director of publications and resources at the Hillel Foundation and former editor of The Hillel Guide to Jewish Life on Campus.