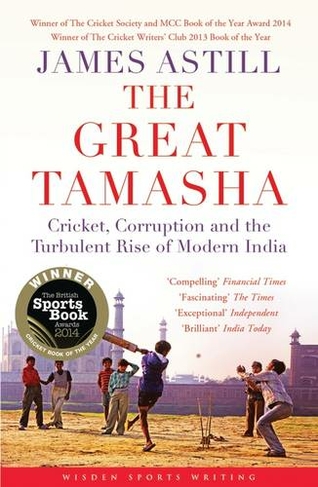 On a Bangalore night in April 2008, cricket and India changed forever. It was the first night of the Indian Premier League - cricket, but not as we knew it. It involved big money, glitz, prancing girls and Bollywood stars. It was not so much sport as tamasha: a great entertainment. The Great Tamasha examines how a game and a country, both regarded as synonymous with infinite patience, managed to produce such an event. James Astill explains how India's economic surge and cricketing obsession made it the dominant power in world cricket, off the field if rarely on it. He tells how cricket has become the central focus of the world's second-biggest nation: the place where power and money and celebrity and corruption all meet, to the rapt attention of a billion eyeballs. Astill crosses the subcontinent and, over endless cups of tea, meets the people who make up modern India - from faded princes to back-street bookmakers, slum kids to squillionaires - and sees how cricket shapes their lives and that of their country. Finally, in London he meets Indian cricket's fallen star, Lalit Modi, whose driving energy helped build this new form of cricket before he was dismissed in disgrace: a story that says much about modern India. The Great Tamasha is a fascinating examination of the most important development in cricket today. A brilliant evocation of an endlessly beguiling country, it is also essential reading for anyone who wants to understand the workings of modern India. Winner of the British Sports Book Awards Cricket Book of the Year 2014. Plate section - 1x12pp colour

James Astill is the political editor of The Economist. He was formerly the newspaper's South Asia Bureau Chief, stationed in New Delhi 2007-2010. He has also worked as the newspaper's defence editor, energy and environment editor and Afghanistan correspondent. He has won several journalism awards including America's Gerald R. Ford Prize for Reporting on National Defence, the Grantham Prize for Excellence in Environmental Reporting and a Ramnath Goenka Award for writing on India.