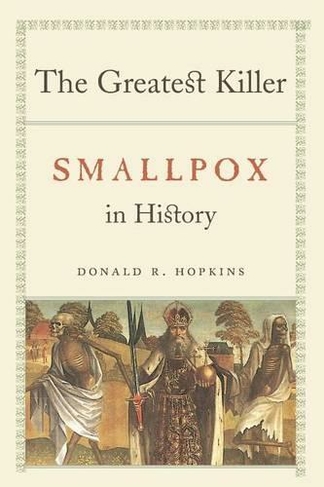 The Greatest Killer Smallpox in History

Once known a the "great fire, "the spotted death" or "destroying angel", smallpox has been rivaled only by plague as a source of supreme terror. Spreading easily through the air, especially in crowded urban conditions, smallpox even today is fatal to 25% of its victims; there is no known cure once symptoms appear. Although naturally occurring smallpox was eradicated in 1977, recent terrorist attacks in the United States have raised the appalling possibility that someone might craft a deadly biological weapon from stocks of the virus that remain in known (and perhaps unknown) laboratories. In "The Greatest Killer" Donald R. Hopkins provides a fascinating account of smallpox and its role in human history. Starting with its origins 10,000 years ago in Africa or Asia, Hopkins follows the disease on its rampage through both the ancient and modern worlds, including its spread to Europe and the Americas. He describes how smallpox often wiped out whole villages and decimated the populations of entire regions, and how the disease disrupted agriculture and trade. Smallpox changed the course of history as it removed or temporarily incapacitated heads of state, halted or exacerbated wars, and devastated populations that had never been exposed to the disease. In Hopkins's history, smallpox was one of the most dangerous - and influential -characters that shaped the course of world events. 36 halftones, 15 line drawings

Donald R. Hopkins, M.D. is associate executive director of The Carter Presidential Center in Atlanta. He is a former deputy and acting director of the Centers for Disease Control and Prevention and a physician who participated in the World Health Organization's Smallpox Eradication Program. His work was nominated for a Pulitzer Prize in 1983.