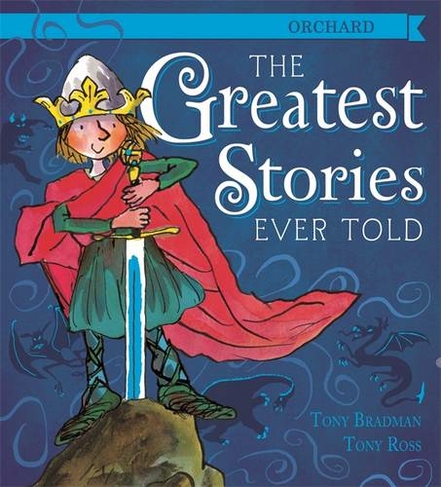 The Greatest Stories Ever Told

This spellbinding collection brings together nine classic adventure stories, each one as thrilling as the last. Travel to far-off lands with fantastical beasts and powerful sorcerers, do battle with dastardly villains and uncover ancient treasure guarded by a fire-breathing dragon. From the heroics of Jason and Hercules, to the bravery of Robin Hood and the cunning of Ali Baba, this is a book full of excitement, surprise and adventure. Told by renowned storyteller Tony Bradman in a lively, humorous style and fully illustrated throughout by the incomparable Tony Ross, this beautiful hardback book, complete with a foiled jacket, will make the perfect gift. Stories included are: Jason and the Golden Fleece King Arthur's Beginnings Aladdin Hercules and the Monstrous Cacus Sinbad the Sailor George and the Dragon Ali Baba and the Forty Thieves Theseus and the Minotaur Robin Hood

Tony Bradman is an experienced editor, writer and anthologist in the world of children's books. He has written numerous plays, stories and poems for young children. His book 'Here come the Heebie-Jeebies and Other Scary Poems' was short-listed for The English 4-11 Awards for the Best Children's Illustrated Books of 2000. Tony Ross was born in London and studied at the Liverpool School of Art and Design. He has worked as a cartoonist, a graphic designer, as the Art Director of an advertising agency, and as Senior Lecturer in Art at Manchester Polytechnic. Tony is one of the most popular and successful children's illustrators of all time, best known for illustrating Horrid Henry and the works of David Walliams. Tony's books have been translated into 40 languages in over 100 countries. He lives in Macclesfield.