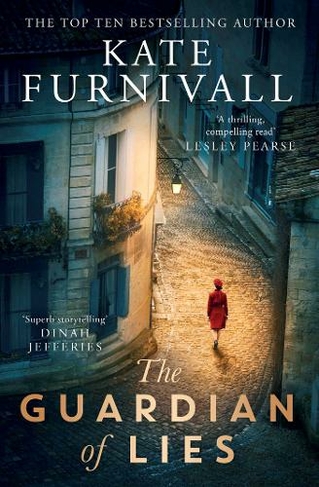 The Guardian of Lies

By Kate Furnivall (Author)
Paperback
https://www.whsmith.co.uk/products/the-guardian-of-lies/kate-furnivall/paperback/9781471172342-12-000.html £7.37 rrp £8.99 Save £1.62 (18%)
GBP
Availability
In Stock
Free Delivery Available When You Spend £25 Or More
Details
Spend £25 On Products To Receive Free Standard Delivery To Your Home Or Free Next Working Day Click And Collect To Store

*** THE TOP TEN BESTSELLING AUTHOR *** Discover a brilliant story of love, danger, courage and betrayal, from the internationally bestselling author of The Survivors. 1953, the South of France. The fragile peace between the West and Soviet Russia hangs on a knife edge. And one family has been torn apart by secrets and conflicting allegiances. Eloise Caussade is a courageous young Frenchwoman, raised on a bull farm near Arles in the Camargue. She idolises her older brother, Andre, and when he leaves to become an Intelligence Officer working for the CIA in Paris to help protect France, she soon follows him. Having exchanged the strict confines of her father's farm for a life of freedom in Paris, her world comes alive. But everything changes when Andre is injured - a direct result of Eloise's actions. Unable to work, Andre returns to his father's farm, but Eloise's sense of guilt and responsibility for his injuries sets her on the trail of the person who attempted to kill him. Eloise finds her hometown in a state of unrest and conflict. Those who are angry at the construction of the American airbase nearby, with its lethal nuclear armaments, confront those who support it, and anger flares into violence, stirred up by Soviet agents. Throughout all this unrest, Eloise is still relentlessly hunting down the man who betrayed her brother and his country, and she is learning to look at those she loves and at herself with different eyes. She no longer knows who she can trust. Who is working for Soviet Intelligence and who is not? And what side do her own family lie on? Further praise for Kate Furnivall's novels:'Murder, passion and betrayal scorch the pages of this superb Cold War spy adventure set in the atmospheric Camargue. Kate Furnivall is back and better than ever.' Louise Candlish 'Gripping. Tense. Mysterious. Kate Furnivall has a talent for creating places and characters who stay with you long after you've read the final word' Jane Corry 'Exquisitely heart-wrenching & utterly engrossing' Penny Parkes 'A thrilling, compelling read. Wonderful!' Lesley Pearse 'Wonderful . . . hugely ambitious and atmospheric' Kate Mosse 'A thrilling plot ... Fast-paced with a sinister edge' Times 'Truly captivating' Elle 'Perfect escapist reading' Marie Claire

Kate Furnivall is the author of eight novels, including the international bestseller The Russian Concubine. She lives in Devon.