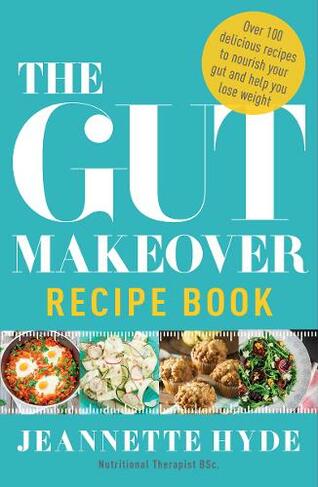 By Jeannette Hyde (Author)
Paperback
https://www.whsmith.co.uk/products/the-gut-makeover-recipe-book/jeannette-hyde/paperback/9781786481528-12-000.html £8.19 rrp £9.99 Save £1.80 (18%)
GBP
Availability
In Stock
Free Delivery Available When You Spend £25 Or More
Details
Spend £25 on eligible products to receive free standard delivery to home or free next working day click and collect to store
Share

'LIFE-CHANGING. THE MOST PRACTICAL GUT GUIDE.' Dr Rangan Chatterjee of BBC1's Doctor in the House The Gut Makeover: This is more than another fad diet. This is a lifestyle you'll want to adopt for life. Join the thousands of people who are transforming their bodies, minds and overall health with this groundbreaking gut diet for a healthier, happier and lighter you. Packed with over 100 delicious and nourishing recipes to make your gut-health transformation easy, delicious and fulfilling, The Gut Makeover Recipe Book also explains the revolutionary new science that reveals that the state of our gut is central to our weight and health - and will help you control your weight, improve your skin, sleep better, lift your spirits and strengthen your immune system for good. Weekly meal plans, dinner party inspiration and perfect, quick week-night recipe ideas include: - Peruvian ceviche - Courgette Bolognese - Seabass with Salsa Verde - Pil Pil Prawns with green leaves ... and many more. There's no calorie counting and you won't go hungry, so what are you waiting for? Join the Gut Makeover revolution today!

Jeannette Hyde is a London-based Registered Nutritional Therapist (BSc mBANT, CNHC) who specialises in helping people lose weight, improve digestive symptoms, as well as their skin, mood, memory and immune system, through her innovative gut diet approach. She is author of The Gut Makeover, and The Gut Makeover Recipe Book, which were published in 2016 and have reached thousands of people in the UK with transformational health for many. She practises nutritional therapy one-to-one, in groups, and on her popular retreats. She is a regular speaker on BBC and has featured in The Times, the Daily Telegraph and numerous magazines and web sites. She is involved in gut-brain research with St Mary's University in London. Before transitioning to the world of health ten years ago, Jeannette was a journalist working across British newspapers and magazines. She is married to German designer Markus, and they have two teenage children Hanna and Max. They live on an island in the middle of the river Thames in London. www.jeannettehyde.com