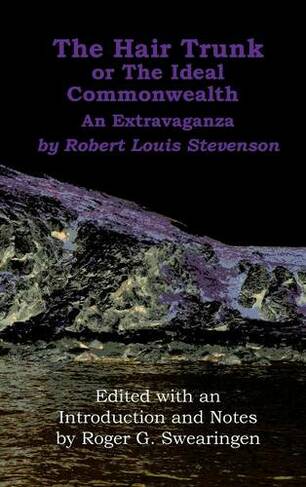 The Hair Trunk or the Ideal Commonwealth: An Extravaganza

Half a dozen young men find themselves at the end of their university years facing the awful prospect that they must now support themselves. They decide to found an Ideal Commonwealth, in the Navigator Islands - Samoa (where, by a wonderful coincidence, a decade later, Stevenson himself eventually settled and where he died and is buried). Here - they reason - work and money, dreary offices and dreary jobs, will not be known or needed. But capital is required to start even an Ideal Commonwealth. One of their number knows of "a real, glowing, gaudy, old-high treasure" - gold and jewels in a trunk in a family castle in the Scottish Highlands, theirs for the stealing, and ...Robert Louis Stevenson began writing this comic novel in April or May 1877, when he was twenty-six, and left it unfinished - after 30,000 words, in nine chapters - two years later. It shows a side of him whom most readers have never known existed: a satirical Stevenson making great fun, in a manner worthy of his contemporaries Gilbert and Sullivan, of the events and passions, the personalities and the predicaments, of his day. Previously published only in a French translation, it now takes its rightful place among his memorable early works of fiction. Transcribed, introduced, and annotated by the noted scholar Roger G. Swearingen from Stevenson's unpublished manuscript (now in the Huntington Library, San Marino, California), this edition reveals glimpses of the author's developing literary skills and of his complex and often madcap personal temperament. The extensive and illustrated annotations are fascinating in themselves, not least for the references to the contemporary late-Victorian scene.

Roger G. Swearingen is best known for his authoritative 'The Prose Writings of Robert Louis Stevenson: A Guide' (1980); the Stevenson entry in the 'Cambridge Bibliography of English Literature' (2000); a comprehensive review of scholarship on Stevenson, including biographies and editions, published in 'Dickens Studies Annual' (2005-2006); and as the discoverer of Stevenson's first published work of fiction, a long short story called "An Old Song", published anonymously in 1877. A graduate of the University of California-Berkeley and of Yale University, after a first career teaching Victorian Literature, Stevenson, and technical writing at the University of North Carolina-Chapel Hill, and the University of California-Davis, he went on to spend more than twenty years in information design for a major electronic measurement company in Northern California. He is currently finishing a full-length biography, 'Robert Louis Stevenson: Spirit of Adventure', for Faber & Faber.