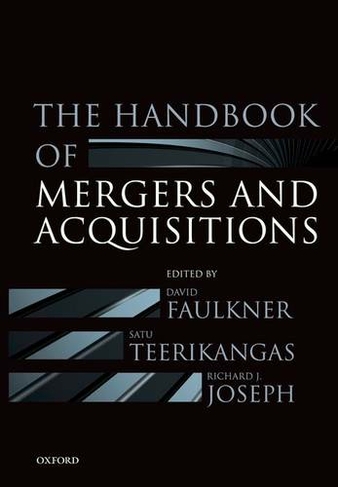 The Handbook of Mergers and Acquisitions

Also available on eBook for £41.27. Click here to purchase from Rakuten Kobo

With its inception at the end of the nineteenth century as a means of consolidation and reorganization, mergers and acquisitions (M&A) have since become quasi-institutionalized as one of the primary strategic options for organizations, as they seek to secure their position in an ever more competitive and globalizing market place. Despite the optimism surrounding M&A as strategic moves, research on post-merger company performance suggests that most firms engaging in M&A activity do not achieve the sought-after performance targets, either immediately or in the years following the deal. What is it that drives M&A activity when research results do not support the performance expectations of these undertakings? Alternatively, have M&A scholars got it all wrong in the way that M&A performance is measured? Is the topic too complex, enduring, and multifaceted to study? The Handbook argues that the field of M&A is in need of a re-rooting: past research needs to be critically reviewed, and fundamental assumptions revisited. A key issue preventing efforts in the practice and study of M&A from achieving dynamic syntheses has been the disciplinary gulf separating strategy, finance, and human relations schools. The Handbook aims to bridge the hitherto separate disciplines engaged in the study and practice of M&A to provide more meaningful results. Toward this end, the Handbook brings together a set of prominent and emerging scholars and practitioners engaged in the study of M&A to provide thought-provoking, state of the art overviews of M&A through four specific 'lenses' - strategic, financial, socio-cultural, and sectorial approaches. By summarizing key findings in current research and exploring ways in which the differing approaches could and should be 'synthesized', it aims to highlight the key issues facing M&A practitioners and academics at the dawn of the third millennium.

Professor David Faulkner is Dean of Magna Carta College, Oxford, a private business school that he co-founded in 2007. He is also Professor at Hult International Business School and Professor Emeritus of Strategy at Royal Holloway, University of London. He was formerly official Student (Fellow) of Christ Church, Oxford and Deputy Director of the Said Business School, Oxford University. He is an Oxford-educated economist by background, who has spent much of hisearly career as a strategic management consultant with McKinsey and Co and Arthur D. Little. He gained a Doctorate from Oxford University (D Phil), researching into conditions for success in International Strategic Alliances. He has written and edited thirteen books including, The Oxford Handbook ofStrategy (OUP).Dr Satu Teerikangas is Lecturer in Management at University College, London. She received her PhD from Helsinki University of Technology. Her research centres on the management of M&A, and has been published in several journals, including the Journal of Management and the British Journal of Management. She co-edits Special Issues on M&As for the Scandinavian Journal of Management and the European Journal of International Management, and co-chairs theM&A track at the European Academy of Management annual conference since 2008. Prior to an academic career, Dr Teerikangas worked for Shell in the Netherlands and the UK. She is on the editorial review board of the International Journal of Cross-Cultural Management.Richard J. Joseph is the Vice President and former Provost of Hult International Business School, Boston, London, Dubai, Shanghai, and San Francisco. Previously he served on the faculty and administration of the McCombs School of Business at the University of Texas at Austin. Prior to his academic career, he worked as an investment banker at Lehman Brothers, a securities trader at Bear Stearns, an international banker at Citibank, and a mergers and acquisitions lawyer for the Bass Group, FortWorth. A graduate magna cum laude of Harvard College (B.A.), Oxford University (M.Litt.), and the University of Texas at Austin School of Law (J.D.), he is co-editor of Prentice Hall's Federal Taxation Series and has written numerous commentaries in the Financial Times, Christian Science Monitor, andTax Notes International. His book, The Origins of the American Income Tax (Syracuse University Press), explores the original intent, rationale, and effect of the early American income ta