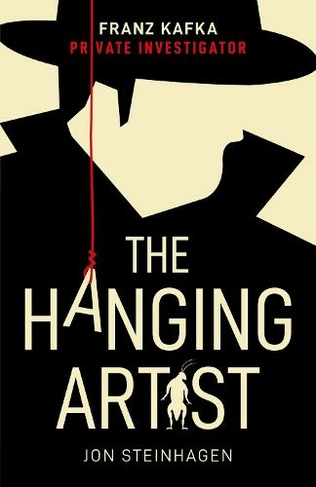 By Jon Steinhagen (Author)
Paperback
https://www.whsmith.co.uk/products/the-hanging-artist/jon-steinhagen/paperback/9781781086476-12-000.html £7.37 rrp £8.99 Save £1.62 (18%)
GBP
Availability
In Stock
Free Delivery Available When You Spend £25 Or More
Details
Spend £25 On Products To Receive Free Standard Delivery To Your Home Or Free Next Working Day Click And Collect To Store
Share

Surrealist modern fantasy in which Franz Kafka, miraculously saved from the tuberculosis that killed him, investigates the supernatural with the aid of a giant cockroach. "Trust me," the insect repeated. Franz did not. What if Franz Kafka did not succumb to tuberculosis at the age of 40? What if he awoke the day after his supposed death to find himself attended by the giant insect he once imagined in his own story The Metamorphosis? And what if he were recruited to investigate the bizarre circumstances surrounding a rash of mysterious hangings plaguing 1924 Vienna? Hangings that are possibly connected to an equally mysterious performer who commits suicide every night at the music hall (but cannot be connected to any crimes)? The Hanging Artist leads the newly rehabilitated Franz Kafka on an absurdist round of discoveries, the solution of which is more fantastical than anything he imagined.

Jon Steinhagen lives in what is known (somewhat affectionately) as The Chicagoland Area, near the historic Brookfield Zoo. His writing career began in theatre, first as a composer and lyricist for several musicals (including The Arresting Dilemma of Mr. K, a musical adaptation of Kafka's The Trial), then as resident playwright at Chicago Dramatists. Somewhere along the way he began writing stories, too, and many are collected in The Big Book of Sounds (Black Lawrence Press).