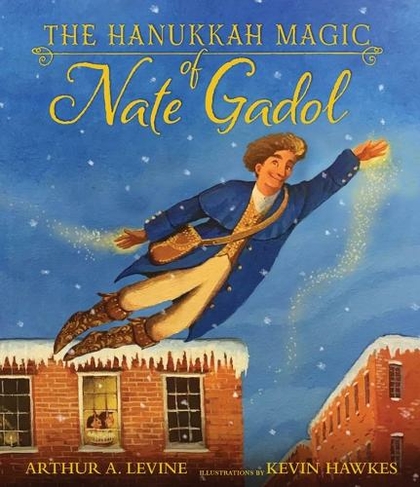 The Hanukkah Magic of Nate Gadol

By Arthur A. Levine (Author), Kevin Hawkes (Illustrator)
Hardback
£10.65 rrp £12.99 Save £2.34 (18%)
GBP
Availability
In Stock
Free Delivery Available When You Spend £15 Or More
Details
Spend £15 On Products To Receive Free Standard Delivery To Your Home Or Free Next Day Click and Collect To Stores
Share

From an imaginative team comes a new holiday myth for all families to enjoy, especially those celebrating both Christmas and Hanukkah. Nate Gadol is a great big spirit with eyes as shiny as golden coins and a smile that is lantern bright. He can make anything last as long as it is needed, like a tiny bit of oil that must stretch for eight nights, a flower that needs to stay fresh to cheer up someone ailing, or a small lump of chocolate that grows to allow the Glaser family to treat their children over the holiday and, during a harsh winter when medicine is needed more than sweets, spurs them to share what little they have with the O'Malleys. In this charming holiday hybrid story, well-known children's author and editor Arthur A. Levine pairs with award-winning illustrator Kevin Hawkes to offer a mythical, magical take on the way Jewish families came to give and receive gifts over Hanukkah, just as their Christian neighbours do at Christmas, thanks to a loving spirit named Nate Gadol working behind the scenes - together with a certain jolly old soul.

Arthur A. Levine has been a children's book editor for more than thirty years. He is also the author of many acclaimed picture books for children, including What a Beautiful Morning, illustrated by Katie Kath, and The Very Beary Tooth Fairy, illustrated by Sarah S. Brannen. He has had his own eponymous imprint at Scholastic Press since 1997 and has published many of the most exceptional children's titles of all time, including J. K. Rowling's Harry Potter series, Philip Pullman's The Golden Compass, Shaun Tan's The Arrival, and Peggy Rathmann's Officer Buckle and Gloria.Kevin Hawkes is the illustrator of many books for children, including the award-winning Library Lion by Michelle Knudsen; A Little Bitty Man and Other Poems for the Very Young by Marilyn Nelson, Pamela Espeland, and Halfdan Rasmussen; and The Three Mouths of Little Tom Drum by Nancy Willard. Kevin Hawkes lives with his family in southern Maine.