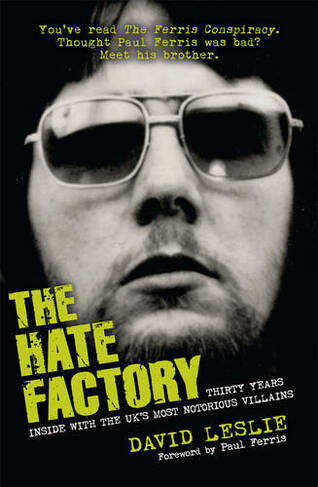 By David Leslie (Author)
Paperback
https://www.whsmith.co.uk/products/the-hate-factory-thirty-years-inside-with-the-uks-most-notorious-villa/david-leslie/paperback/9781845966195-01-000.html £11.95 rrp £12.99 Save £1.04 (8%)
GBP
Availability
Currently unavailable. We don't know when or if this item will be back in stock
Free Saver Delivery on orders over £20
Details
FREE SHIPPING over £20 for Saver Delivery
Share

Convicted murderer Billy Ferris has endured more than three decades behind bars in many of Britain's prisons. In The Hate Factory, he candidly documents his experiences in jail with some of the UK's most notorious criminals. Jailed for life in 1977 for a crime of passion, Ferris experienced betrayal and treachery on the inside. He unexpectedly formed friendships that led to his being labelled a 'bombers' crony' and found love while on the run after a dramatic escape. He vividly describes the cruelty, savagery and degradation that go hand in hand with prison life and details the nightmare that was Wormwood Scrubs, the prison he christened 'the Hate Factory'. He relays what happened when his cell was used as a courtroom for an IRA punishment trial and how he hatched a plan to assassinate the son of a legendary underworld godfather and plotted to murder an informer. Over the 30 years during which Ferris has been imprisoned, his fellow inmates have included some of the UK's 'most wanted' from London underworld enforcer 'Mad' Frankie Fraser to Archie Hall, the serial killer dubbed 'the Monster Butler'. 1 x 8pp colour

David Leslie has worked for the News of the World since 1970. He is also the author of the bestselling Crimelord, about Tam McGraw, as well as The Happy Dust Gang, The Gangster's Wife and Mummy, Take Me Home. He lives in Glasgow.